Deondre Moore had no idea that a Thursday night out with friends in Houston in 2014 would end with him testing positive for HIV. At 19 years old, the African-American college student was hanging out at a local hot spot when he noticed the venue was offering HIV testing.

“Because I thought I was in a monogamous relationship, I didn’t think I needed to get tested,” says Moore, who is now 26 and works as an HIV advocate in Dallas. “But I did it to lead by example so that my friends would get tested as well.”

After receiving an oral swab, Moore got his results in 15 minutes. To his surprise, he tested HIV positive. “I kind of spaced out,” he recalls. “I just remember [the person who told me] saying, ‘You should get blood work done.’”

When Moore went to a clinic for blood work, his results were the same. A doctor confirmed his status and left him alone in his office to come to terms with the news.

“I remember looking out through the window in the doctor’s office,” Moore says. “There were these little butterflies on the windowpane. I remember wishing that I was one of those butterflies and I could just fly away.”

Moore’s story is a common one. In the United States, nearly 45% of young people between ages 13 and 24 who are HIV positive don’t know they are living with the virus, according to the Centers for Disease Control and Prevention (CDC). Inadequate sex education, low HIV testing rates and stigma are a few of the reasons some young people are unaware of their status.

At the time of his diagnosis, Moore didn’t know all the facts about HIV. He just knew that he needed to do everything possible to live.

“I didn’t know enough then because in Texas they don’t teach comprehensive or inclusive sex education, which is part of the work I’ve been doing to change that narrative,” says Moore, the U.S. partnerships and community engagement manager at Prevention Access Campaign (PAC).

PAC is the health equity initiative behind the concept of Undetectable Equals Untransmittable (U=U), meaning a person with HIV who achieves and maintains an undetectable viral load cannot transmit the virus to others through sex.

Inclusive sex education is vital to reducing HIV rates and raising awareness among youth. Young people account for 21% of new HIV diagnoses annually, and most of those cases (83%) are among men who have sex with men (MSM). What’s more, Black adolescents account for 42% of all new diagnoses among young MSM.

It won’t be an easy feat in a state like Texas, where people, Moore says, are more closed-minded and often unwilling to embrace the LGBTQ community. “But it’s imperative that we get that, because it was having sex with another male that resulted in my HIV diagnosis,” Moore says.

According to a 2019 PAC survey, many millennials and members of Generation Z across the United States lack extensive knowledge about sexual health, HIV and U=U.

Survey findings also revealed disparities in HIV awareness and education among African-American youth. An estimated 80% of HIV-negative Black young adults reported being highly confident they aren’t at risk of contracting HIV, despite research showing this population faces the greatest risk.

When it came to U=U, 31% of young Black people with HIV believed that being undetectable meant they were incorrectly diagnosed and didn’t have HIV.

“As Dr. Anthony Fauci says, ‘U=U is the foundation of ending this epidemic,’” Moore explains, referring to the director of the National Institute of Allergy and Infectious Diseases. “It’s liberating and removes HIV stigma.”

With these findings, Moore helped develop the campaign “Owning HIV Presents: HIV in Young Black America” in collaboration with the drug company Merck. Initially, the project was supposed to address HIV-related disparities and raise awareness on historically Black college and university campuses. However, due to COVID-19, it became a virtual webinar to discuss HIV in the young Black community.

Moore is intentional about the messaging and language he uses when it comes to reaching young people of color about HIV and U=U. Through his role at PAC, he selects specific partners around the country who can help ensure that youth feel empowered to get on treatment and to take control of their sexual lives. “HIV does not have to be a death sentence,” Moore says. “You can live a healthy, happy and long life—and date—with HIV.”

One of PAC’s partners is the Human Rights Campaign (HRC), a national LGBTQ advocacy group that understands the importance of promoting HIV awareness and sex positivity among young people.

“It’s OK to have sex,” says J. Maurice McCants-Pearsall, MBA, director of HIV and health equity at HRC. “Who you have sex with is nobody else’s business. Just as long as when you’re having sex, you’re doing everything that you need to protect your body.” 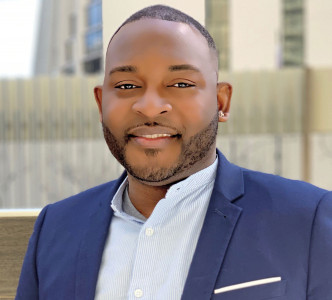 In 2020, HRC created the “My Body” campaign to raise HIV awareness and education among Black and Latino LGBTQ people between ages 16 and 35. “My Body” also encourages young adults to embrace their bodies and sexuality.

“We developed a campaign that laid out the numbers as it relates to those who are disproportionately impacted by HIV,” McCants-Pearsall says. “But in addition to that, we also wanted to provide safer-sex tips because we understand that people are still having sex during the COVID-19 pandemic.”

More than 1,000 “My Body” boxes were requested, according to McCants-Pearsall. HRC fulfilled all orders. 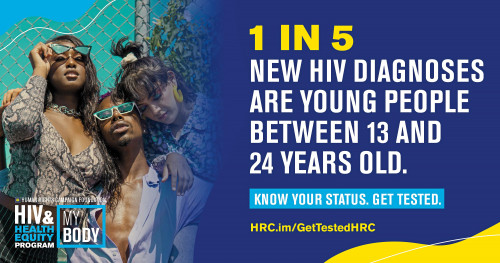 For McCants-Pearsall, who tested HIV positive as a young adult, the campaign is personal. He remembers having no such resources as a young Black man.

“I was told not to talk about my sexuality,” he recalls. “No one had conversations about sex with me. It caused me to be misinformed as it relates to sex and sexual health.”

Now McCants-Pearsall wants to ensure that young Black and brown people exercise agency over their own sexual health. His goal is to mitigate HIV risk among this demographic by helping expand access to prevention.

“I was told HIV was a death sentence,” he says. “But every year, I get to see one more year around the sun. So live your best life. Live it stigma-free and without reservation.”

Living stigma-free begins with sharing one’s story and experiences, says Armonte Butler, senior program manager of LGBTQ health and rights at Advocates for Youth, an organization based in Washington, DC, that partners with young people in the fight for sexual health, rights and justice. It is responsible for National Youth HIV/AIDS Awareness Day (NYHAAD), which is observed every year on April 10.

“You are your best advocate,” says Butler, who is 25 years old, African American and HIV negative. 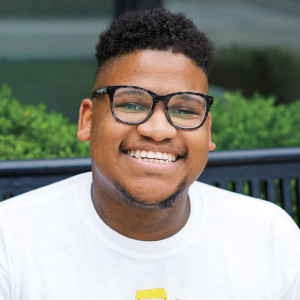 For most young people, stigma determines whether they will get tested for HIV or seek treatment. And it’s not just self-stigma that affects this population. Negative health care experiences also contribute to young people’s fear of addressing concerns around HIV and other sexual health issues.

When doctors shame young people for their sex life or risky behaviors, it pushes youth further away from seeking the help they need to live healthier lives.

“If I was at a facility that is five minutes away from my house, but I experienced something stigmatizing, I might have to go to a city that is more inclusive and 30 minutes away,” Butler says. “That includes money and travel, but I’m probably not going to do that because of that one experience I had.”

Butler believes doctors don’t show enough appreciation and encouragement to young people for taking charge of their health and seeking care. If they did so, perhaps more young people with HIV would start on or better adhere to treatment.

“Any negative interaction could mean that folks aren’t going to return or be interested in returning,” Butler explains. “And if they’re going to return, it’s going to take some type of motivation to get them to go back.”

HRC’s McCants-Pearsall encourages young people to have open and honest conversations with their health care providers. “If they can’t have a conversation with you about your sexual health, then you need to find a new doctor,” he says.

He wants young people to make the most of available resources, whether that means frequenting local health departments or community-based organizations.

One underutilized way youth can take advantage of health care services is to ask providers about pre-exposure prophylaxis (PrEP), a daily pill that can prevent HIV-negative people from contracting the virus. “PrEP is a key HIV prevention tool, just like condoms,” Butler says. “It’s a remarkable tool that has allowed people to have another option.”

Daily oral Truvada (tenofovir disoproxil fumerate/emtricitabine) is estimated to be about 99% effective among men who have sex with men and about 90% effective among heterosexual men and women; indeed, further studies may reveal the latter figure to be even greater. New options are being studied, including a monthly injection.

Despite PrEP’s remarkable ability to reduce the risk of HIV transmission, most young people still don’t know about or have access to the medication, according to Butler. In addition, PrEP use continues to be stigmatized.

“All those stigmatizing ideas that people have about birth control are the same ones they have about PrEP,” Butler explains. “It’s the same thing when thinking about access.”

Many young people aren’t aware of PrEP because their providers may not discuss the pill with them. In addition, other barriers, such as cost and availability, might prevent youth from accessing PrEP.

For those in the South, especially in rural areas, PrEP can be hard to come by. Even college students in these communities don’t have equal access to PrEP. “There are some colleges that offer PrEP, but there are some that don’t even offer condoms,” Butler says. Those that don’t provide these services tend to be religious institutions that push for abstinence rather than promote safer sex among their students.

Butler believes that college campuses can play a crucial role in offering students medically accurate and inclusive sexual health information and services, such as PrEP. “Colleges have the opportunity to streamline the information and make it concrete and tangible for all students,” he says.

As a result of COVID-19, Butler is working with young people on college campuses trying to ensure that PrEP is offered through school telehealth services.

“What we really need right now is targeted or prioritized outreach campaigns that are really educating folks about PrEP,” Butler says. “But also making sure that sex education includes information about PrEP.”

Moore echoes those sentiments. “It all goes back to education,” he says. “Providing education and ensuring that folks have the tools they need to overcome HIV is how we change the trajectory of HIV.”

POZ Poll: Did your school’s sex education include facts about HIV?

Yes, but the classes offered only a few cursory details.

No. My sex education did not include HIV facts.

I went to school before the world learned of HIV in the early 1980s.

I did not receive any sex education.