Activist and author Sarah Schulman discusses the early history of ACT UP New York in a new book.

Sarah Schulman is an activist, author and historian. Spanning decades, her novels and nonfiction works explore LGBTQ themes, including HIV/AIDS. She has also produced plays and films, including the documentary United in Anger: A History of ACT UP, which she coproduced and was directed by Jim Hubbard.

So it’s no surprise that her newest book, Let the Record Show: A Political History of ACT UP New York, 1987–1993, arrives with great anticipation. Based on interviews with surviving members of ACT UP (AIDS Coalition to Unleash Power), it celebrates the extraordinary people who rose up to fight HIV/AIDS and changed the world. 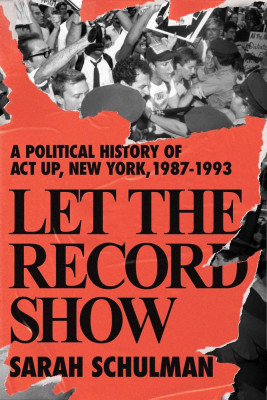 “Let the Record Show” by Sarah SchulmanCourtesy of Farrar, Straus and Giroux

How did you come up with the idea for the book? Why did you publish it now?

Jim Hubbard and I started the ACT UP Oral History Project in 2001 because the internet revolution had eclipsed ACT UP. Suddenly, everybody was online, and none of our stuff was digitized, and it was like we had disappeared.

We thought that we would just do these long-form interviews and that other people, probably academics or others, would analyze the data, but we found as the years went on that nobody was really analyzing the data. I know what kind of treasures were in the interviews, but they never seemed to appear anywhere.

It was either because people weren’t reading them critically, or they were just searching for keywords. I don’t know exactly what the problem was, and, of course, Jim in the meantime had preserved about 2,000 hours of archival footage. We made all that available. We made everything available for free. We had open access. We had 14 million hits on our website, and yet the treasures were not being unearthed.

It started to go really bad when work started to appear that really distorted the history, creating basically white male individual heroes and ignoring the actual functioning of the organization and what the AIDS coalition was really like, and it was very disturbing.

We kept trying to find somebody to do it, and I had always been a huge fan of Taylor Branch’s book Parting the Waters, which is a two-volume analysis of the civil rights movement’s strategies, and it just became clear that I was going to have to write it myself.

I spent about three years rereading interviews and trying to cohere large tropes. What were the themes? What did they show? What was revealed? I didn’t want to just reprint interviews. I wanted to really analyze the material.

After about three years, I had a manuscript, then we put it up for sale to major book publishers. I ended up getting a great editor, Jackson Howard, at Farrar, Straus and Giroux, who was 26 years old, and he helped me fashion it in a way that someone who’s 26 can understand.

Who do you hope will read the book? What is the significance of the title?

The book is for everyone, but it’s mostly for people who want to make change right now. ACT UP was probably the most recent successful social movement in America. It’s important to understand that movements can win something, how they do it and what mistakes they make.

So it’s an anti-nostalgia book. It’s really about strategy, and the title comes from a very early art event that ACT UP did at the New Museum that was called Let the Record Show—this was before the art collective Gran Fury was even formed—where they showed images of the Nuremberg Trials.

What was implied was that the people who were responsible for the neglect and indifference that caused the mass death experience of AIDS in the United States would someday be made accountable, and yet they never really have been.

In this book, I wanted to finally fulfill the wish of that early exhibit by showing who really were the problematic people and who really created the solutions.

The first sentence in the preface declares that this is a book in which all people with AIDS are equally important. Why did you start with that?

Because the popular historicization in recent years has narrowed and whitened the coverage of AIDS history to the point of parody.

It gave the impression that it was individuals, most of whom were white and male, who transformed the AIDS crisis, and that’s just simply not true. The crisis was transformed by a very broad coalition of lots of different kinds of people.

Many of us have the wrong idea when we say the word coalition. Some people think of it like a Benetton ad with an Asian person and someone Puerto Rican, etc. That’s not what a coalition is. Coalitions are silos of like-minded people who work together in a way that is effective and that makes sense to them, standing side by side with each other and having their work resonate with each other. That’s really what the AIDS coalition was.

In my book, I’m also including mothers, prisoners, Haitians, drug users, homeless people. If you’re not looking at all of these different kinds of groups, you will have no idea how change actually occurred.

The first chapter of the book focuses on Puerto Ricans in ACT UP. Why?

However, the two Puerto Rican men that I focus on were very well-known leaders in ACT UP. Both were HIV positive. One of them is Robert Vazquez, who is Nuyorican, Black Puerto Rican, born in New York. The other, Moisés Agosto, was from the island, so contrasting the two of them was absolutely fascinating.

In the process, I learned that there were four Latino committees in ACT UP. There was the Latino Caucus, the Spanish Translation Committee, the Immigration Committee and the Majority Action Committee. When I interviewed Cesar Carrasco, he named about 35 Latinos who were in ACT UP. So I thought why not just start there?

Why did you put remembrance sections in the book?

So many people in ACT UP died. I never had a chance to interview them because I didn’t start interviewing until 2001. There are so many of them that I did not include. If you look at our film United in Anger, you can see more of them. The deaths of our friends were overwhelming. People carry it with them the rest of their lives, so it had to be part of the story.

What do you want folks to take away from this book?

The most important idea is that successful movements do not use consensus. A truly effective movement will practice radical democracy. It will have a big tent in which people can respond simultaneously in the way that makes sense to them, because people can only be where they’re at—trying to force people into one analysis or one strategy or even one vocabulary has historically always failed.

ACT UP succeeded to the extent that it did because it had so many different strategies and so many different communities acting in a way that made sense to them at the same time that there was a simultaneity of response. That is where I hope we can go next in our movement.