Rising gonorrhea among gay and bi men in particular is concerning given recent warnings about the emergence of drug-resistant strains.

The national sexually transmitted infection (STI) diagnosis rate continues to climb, to the considerable concern of the Centers for Disease Control and Prevention (CDC). The 2 million diagnoses of chlamydia, gonorrhea and syphilis reported to the federal public health agency in 2016 represented a record high.

Particularly worrisome given recent serious warning signs of the emergence of drug-resistant strains of gonorrhea is the ever-rising rate of that STI, a climb that is apparently especially steep among men who have sex with men (MSM).

The CDC released its annual Sexually Transmitted Disease Surveillance Report (the agency opts for the term STD over STI) today. In the report, the agency points to devastating public health budget cuts as a possible driver of the overall STI epidemic. In recent years, more than half of state and local STI program budgets have been reduced. Such diminished resources can lead to staff layoffs and shorter clinic hours as well as increased out-of-pocket expenses for those seeking STI diagnosis and treatment services.

Early diagnosis and prompt treatment of STIs can help reduce their spread by cutting down the time individuals are infectious.

Chlamydia, gonorrhea and syphilis are all bacterial infections and curable with antibiotics. However, recently the CDC has sounded an ever-urgent alarm about the possibility that strains of untreatable gonorrhea may emerge. The STI has become resistant to nearly every drug ever used to treat it, and currently, only one recommended treatment regimen remains: a combination of the antibiotics azithromycin and ceftriaxone. New antibiotics for gonorrhea are currently in development, but public health experts are concerned that even if these experimental drugs prove effective, they may not hit the market fast enough to provide a timely alternative to the sole current preferred regimen.

A CDC timeline illustrating how gonorrhea has developed resistance to numerous antibiotics over time.Courtesy of CDC

The vast majority of STIs go undiagnosed and unreported, and certain STIs, such as human papillomavirus (HPV) and herpes, both of which are viruses, are not reported to the CDC. With an estimated 20 million STI transmissions occurring annually in the United States, the CDC’s surveillance report is unable to fully capture the epidemic. Nevertheless, the report provides vital information about the severity of the epidemic and where better action is needed to treat and prevent STIs.

Forty-six percent of chlamydia diagnoses were among young women 15 to 24 years old. This group is at particularly high risk of severe consequences from untreated STIs. Chlamydia and gonorrhea raise the risk for pelvic inflammatory disease, which may lead to chronic pelvis pain, infertility and ectopic pregnancy, a complication that can be life-threatening. More than 20,000 women annually become infertile as a result of undiagnosed STIs according to the CDC. 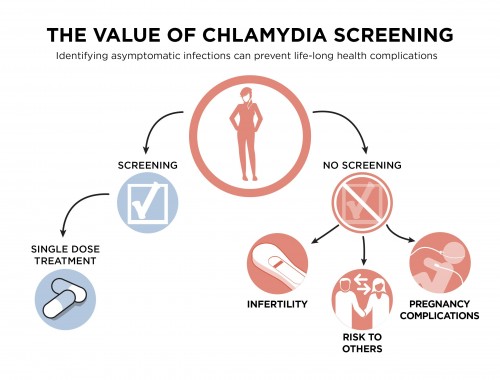 A CDC graphic from the STD report regarding the importance of chlamydia screening for women in particularcdc.gov/nchhstp 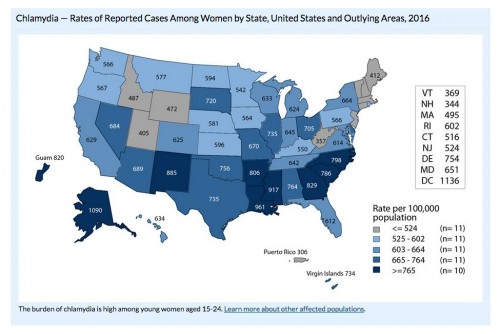 Among women, the burden of chlamydia was the greatest in the South.cdc.gov/nchhstp

STIs can also facilitate the transmission of HIV: They raise the risk that people without HIV will contract the virus through sex as well as the risk that HIV-positive people who do not have a fully suppressed virus thanks to antiretroviral (ARV) treatment will pass HIV to others through sex. (Recent studies of large groups of couples in which one partner had HIV and the other did not have seen no transmissions of the virus among them when the HIV-positive partner had an undetectable viral load, even when the study members had high rates of STIs.)

Between 2015 and 2016, the gonorrhea rate rose most steeply among men, who saw a 22 percent increase, from 140 to 171 cases per 100,000 men. Past research has indicated that gonorrhea is rising among MSM in particular.

While the number of new syphilis diagnoses is small, its upward trajectory is considerable cause for concern according to the CDC. As recently as the early 2000s, the STI was nearly eliminated in the United States, so its resurgence represents a major public health failure.

The rate rose 18 percent between 2015 and 2016 overall, with the majority of cases occurring among MSM. Of the diagnoses among men for which the sex of the sex partner is known, 81 percent (16,155) were among MSM. The CDC estimates that about half of the MSM diagnosed with syphilis are HIV positive. 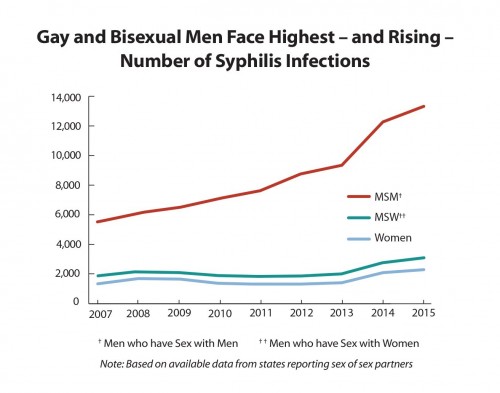 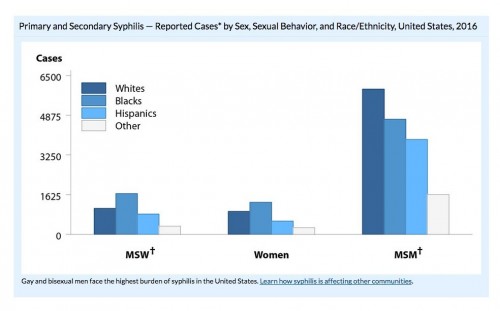 2016 syphilis diagnoses broken down by risk groups and race. “MSW” stands for men who have sex with women.cdc.gov/nchhstp

Syphilis is also increasingly affecting other populations, with a 36 percent one-year rise in the diagnosis rate among women and a 28 percent rise in the rate among newborns.

Last year, 628 babies were born with syphilis (16 per 100,000 live births) contracted from their mothers, infections that led to more than 40 severe health complications and even death among the newborns. By comparison, the United States saw a respective 461 and 492 such cases of congenital syphilis in 2014 and 2015. 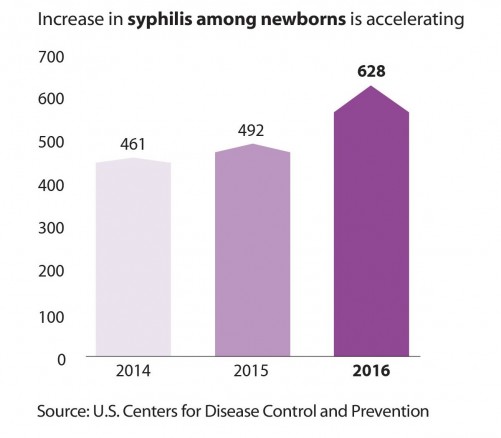 The advent of Truvada (tenofovir disoproxil fumarate/emtricitabine) as pre-exposure prophylaxis (PrEP) has raised questions about how its increasing popularity among MSM may affect STI rates in that overall population. Approved in 2012, Truvada began to catch on starting in late 2013; in the years since, the number of users has risen steadily. Recent research has supported anecdotal evidence that starting PrEP is associated with increased sexual risk taking among MSM. However, PrEP studies have generally not seen that starting Truvada as prevention is associated with a significant rise in STI rates.

The number of people found to have started PrEP per quarter in the pharmacies surveyed by Gilead Sciences. (“TVD” is short for Truvada.)Mera, Magnuson, Hawkins, Bush, Rawlings and McCallister, Gilead poster presentation, IAS 2017.

“The STD increases reported in the 2016 STD surveillance report are unlikely to be completely attributable to increased use of PrEP,” says Elizabeth Torrone, MSPH, PhD, an epidemiologist at the CDC’s Division of STD Prevention. “The magnitude of individuals currently on PrEP is not large enough to account for all of the STD increases in 2016.”

According to Gilead Sciences, which manufactures Truvada, an estimated 136,000 people were taking PrEP as of mid-2017. Data suggest that the vast majority of these individuals are MSM and that use among that population is predominantly among whites age 25 and older.

“Additionally,” Torrone says, “rates of syphilis among MSM began increasing before PrEP was routinely available. However, it continues to be important for MSM, including those on PrEP, to talk to their provider about strategies to reduce their risk for STDs, including routine STD screening.”

The CDC recently published a modeling study that projected that increased PrEP use would actually lower overall STI rates, thanks to the routine medical monitoring required to receive a prescription for the prevention pill. If those engaging in sex that puts them at high risk for HIV and STIs go on PrEP, not only do they lower their risk of HIV, but they also will likely increase their STI testing rate. This allows clinicians to diagnose and treat cases of STIs earlier, reducing the time individuals spend infectious and thus curbing the spread of STIs throughout the population.

To read a fact sheet on the report, click here.