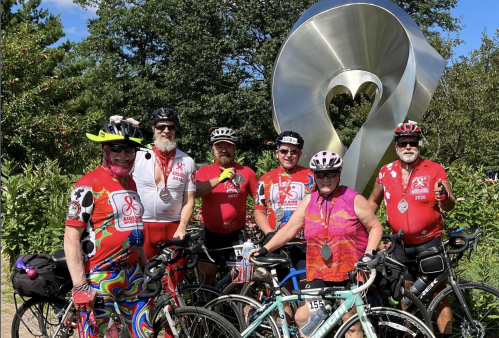 The AIDS bike ride through Minnesota raises funds for three HIV service organizations in the state, including a camp for children.

As cyclists in Minnesota’s 20th Red Ribbon Ride crossed the finish line August 21 and raised over $110,000 for three HIV organizations in the state, local health officials warned of a spike in HIV cases in three counties, reports ABC affiliate KSTP.com.

As of May 2022, state data show 71 news cases in Hennepin County, home to Minneapolis (the state’s most populous city), and Ramsey County, home to St. Paul. Two years ago, health workers declared an HIV outbreak in those counties; another was added for the Duluth area in 2021.

The HIV cases are mostly related to injection drug use and the growing size of encampments of people who are homeless, KSTP.com reports.

Meanwhile, the Red Ribbon Ride will provide funding for three HIV service organizations in the state:

“We are combating increasing rates of HIV on multiple fronts, and in 2022, that is absolutely unacceptable,” Matt Toburen, executive director of The Aliveness Project, told the news crew. “We have the knowledge and the tools to end HIV. We just need the resources and the political will to get us to the end of AIDS in Minnesota.”

In related news on POZ.com, The Aliveness Project opened a free PrEP clinic last fall to offer HIV prevention, and health officials in Duluth sounded the alarm last summer about an HIV and syphilis outbreak.