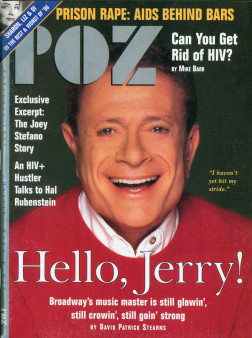 Jerry Herman on the cover of POZ in 1997

In a 1997 POZ cover story, the “Hello, Dolly!” scribe raved about drug trials and the new lifesaving meds.

Broadway tunesmith Jerry Herman—famous for the smash hits Hello, Dolly!, Mame and La Cage aux Folles—died December 26, 2019, at age 88. The cause was pulmonary complications, according to Playbill. He had been living openly with HIV since 1992, when his status was disclosed in a New York Post gossip column. Below is a CBS news item on the legendary music man:

In 1997, as a revival of Hello, Dolly! ran on Broadway and shortly after the publication of his memoir, Showtune, Herman appeared on the cover of POZ. In the feature story titled “He Is What He Is” (a sly nod to his hit song “I Am What I Am,” embedded below), Herman was thrilled to tell the world about recent developments in HIV treatment (lifesaving meds became available for the first time in 1996). He explained to POZ:

“In Showtune, I wanted to tell stories about that fabulous era when there were 20 musicals a season. Mary Martin in one and Gwen Verdon in another. It was a very heady, exciting time, and I had a little part in it. I also wanted to tell the story honestly of a gay man in America who was comfortable with that persuasion. But almost more than the stories about Ethel Merman and Pearl Bailey, I wanted to tell people in my situation that there are medications now that can normalize your system. At the moment, I have no viral activity in my body. It’s below zero. It’s called ‘out of range.’ I can hardly believe I’m telling you this. I’m not a person who believes in miracles. I wasn’t brought up to believe in miracles. But I think I do now. Not even in my wildest hopes and dreams would I ever have dared to think that I’d be here, working very hard.”

Herman explained that he had participated in an experimental study of protease inhibitors the previous year. “My medical records were sent to the FDA [Food and Drug Administration] along with many hundreds of others to help get the drug approved,” he told POZ in 1997. “I think that’s the best thing I’ve done for this world.”

In 2008, on the occasion of his 77th birthday, Herman once again spoke with POZ. “My good health never ceases to amaze me,” he said. “I’ve been on my regimen for 8+ years. My favorite word is UNDETECTABLE, which is always stamped on the latest copy of my blood work!… I’ve seen people’s attitudes go from fear to acceptance, and I only hope that it doesn’t turn into complacency.”

Herman’s Broadway career took off in the 1960s. He won four Tonys and two Grammys. In 2010, he was named a Kennedy Center honoree. You can watch a clip from the ceremony below, which includes a medley of his hits.