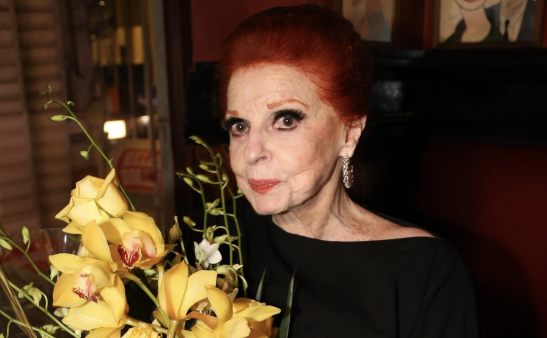 Actress Carole Cook’s career spanned over half a century—including memorable roles on TV, in film and onstage—and for much of that time, she used her skills and connections to advocate raise funds for HIV and AIDS causes and champion LGBTQ equality. She died January 11, of heart failure, according to The Hollywood Reporter. She was 98.

She got her big break in show business from Lucille Ball, who took Cook to Hollywood to perform in a revue she was putting together. “I had no place to live in California, so I lived in Lucy’s guesthouse until I got settled,” Cook recalled years later in an interview with Queer Voices. “She changed my name. I was born Mildred Frances Cook, but Lucy didn’t think it was a good show business name. She gave me the name Carole after Carole Lombard. Lucy said to me, ‘You have the same healthy disrespect for everything in general, just like Lombard.’”

A post shared by Lucille Ball - The Lucy Lounge (@thelucylounge)

Cook appeared in several episodes of The Lucy Show and Here’s Lucy, which marked the beginning of many appearances on TV shows over the decades, notably on McMillan & Wife, Maude, Dynasty and Grey’s Anatomy. She also appeared onstage—as Dolly Levi in Hello Dolly!—and on the big screen, including roles in American Gigolo opposite Richard Gere, The Incredible Mr. Limpet with Don Knotts and in Sixteen Candles as Molly Ringwald’s handsy grandma.

In the 1980s, when AIDS first struck, Cook and her husband, Tom Troupe, raised money to help those affected by HIV and AIDS, especially in the Hollywood and Broadway communities.

In 2016, Cook gave an interview to Queer Voices as she was preparing for a show to celebrate Carole Channing’s 95th birthday and promoting her own touring cabaret show to raise money for HIV organizations in Los Angeles and San Francisco. Below is an excerpt from the interview:

WW: Do you mind if I call you an activist for LGBTQIA+ community?

CC: Not at all. I’ve been fighting for LGBTQIA+ rights for over thirty years. My first introduction to AIDS was in 1983 or 1984. I was getting ready to open the Los Angeles company of 42nd Street. Now at that time, in New York, there was a lot of talk about AIDS. It wasn’t called AIDS or HIV then. It was called gay cancer and the gay epidemic. There was a kid in the chorus of 42nd Street, who got sick. He was a very young man, and he was from a wealthy family. His family disowned him. I was appalled and shocked by what happened to him and I began to look into this disease.

WW: This was in the early years of the crisis?

CC: It was before there were any organizations to help. Back then it was considered a death sentence. Our friends started dying. Tom and I got phone calls every week that someone we loved was either sick or had died. It was a grim time.

WW: This is what got you involved?

CC: Tom and I got together with about 10 to 15 of our friends and started raising money. We gathered together what money we could and gave it to our friends, who’d gotten sick. They needed things like groceries, rent, and utilities. You see, the problem was so big and many of our friends had partners. So, if one of them got sick then before long the partner would get sick too and there was no help for them. What we did was–kind of a homegrown charity to help our friends.

WW: Did you lose a lot of friends in those early years of the disease?

CC: It was terrible. We lost fellow performers, choreographers, directors, producers, and musicians. The entertainment profession has always been a refuge for LGBT people and we lost a whole generation of people. It wasn’t just the people who already worked in entertainment but a generation of young people, who got sick before they even had a chance to have careers.…

CC: Oh yes. Rock was a good friend ours. I had worked with him on many episodes of McMillan & Wife. At first, his being sick was a big secret. I had thought of Rock for playing the role of the director in the Los Angeles company of 42nd Street. It’s a key role and he could talk-sing it. I was planning on calling the producers in New York and suggest him for the part until I saw him one day at the car wash on Santa Monica Blvd. and I was taken aback.

CC: Rock had always been such a masculine and good-looking man but his appearance had totally changed. He was thin, sallow with sunken cheeks, and he looked very weak. He said to me, “I guess you’re surprised that I’ve lost so much weight. Well, I have a heart problem.”

WW: What did you think when he said that?

CC: Well, I guessed that he had contracted AIDS but it was really for him to decide how to handle it. Nobody knew how to handle it back then. Actors and actresses had to stay in the closet or lose their careers. Eventually, Rock knew he was going to die and he went public about his condition, with the help of his publicist, Dale Olson. Rock helped make the disease real to people.

WW: And then you got involved with the STAGE benefit?

CC: David Galligan called me. You see, director David Galligan, Michael Kearns, James Carroll Pickett and Susan Obrow had an idea to help people with HIV/AIDS. It was their bid to do something about this disease.

WW: So that was the start of the STAGE benefit?

CC: Yes, the first show was the music, Leonard Bernstein. Mr. Bernstein was very upset about the crisis and allowed us to use all his music, free of charge and then other performers like myself committed to performing, free of charge. Everyone in the community got together. Musicians, actors, stagehands—just all of us. It was very much like Mickey Rooney and Judy Garland in a barn saying, “Let’s put on a show.”

WW: The benefit has grown and is still going strong?

CC: This will be our 32nd year. What we do is different from the big ones like Elizabeth Taylor or Elton John. They raise millions for research. The money we raise goes directly to people living with HIV/AIDS. We help people on a one-to-one basis. The things they need to get through the day. Groceries, rent, bills—all the necessities.

WW: You work for other charities too?

CC: Every year I perform at a benefit in San Francisco called Help Is on the Way. It was started by two women whose only sons both died of AIDS. They started the organization as a way to honor their sons’ memories and help other sons and daughters living with HIV and AIDS.

To read other recent obituaries about HIV advocates, click on the following headlines:

“R.I.P. Hunter Reynolds, an Artist and Activist Who Explored AIDS and Gender,”

“Of Course Leslie Jordan Advocated for HIV and AIDS Causes”

And for a collection of related articles, click #Obituary and #AIDS History.