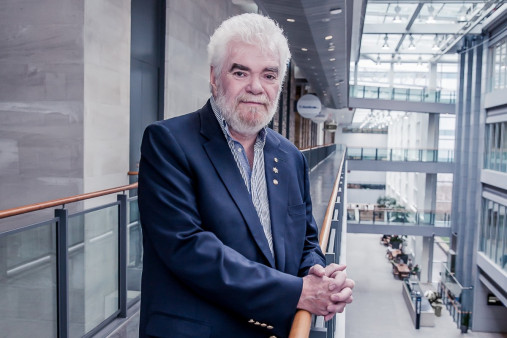 He recently tried an experimental brain surgery to treat his alcohol addiction.

Canadian-born microbiologist Frank Plummer, MD, a leading researcher in HIV, SARS, Ebola and H1N1 flu, died while in Kenya for a celebration honoring his past research in the African country. He was 67 and reportedly died of a heart attack, according to BBC.com.

Plummer received many awards for his groundbreaking HIV work. More recently, he had made headlines for undergoing an experimental surgery involving brain implants to treat his alcohol use disorder.

At the start of the HIV epidemic in the 1980s, little was understood about the virus. One of Plummer’s important findings was that HIV could be transmitted between mothers and babies through breast milk.

A faculty member of the University of Manitoba, he conducted research in Nairobi, Kenya, where the HIV rate was unusually high. While studying sex workers there—notably a handful of women who were repeatedly exposed to HIV but never contracted the virus—Plummer realized that some of the women had “sleepy” immune systems that failed to recognize and then attack HIV. As a result, the virus didn’t take hold and infect them. For more about that, read the 2016 Global Citizen profile titled “How a Sex Worker Led This Doctor to Groundbreaking HIV Discovery.”

Plummer’s work led to new ways to approach treatment and potential vaccines. In 2016, he received the Canada Gairdner Wightman Award, nicknamed the “baby Nobel,” for his HIV research.

His accomplishments were not confined to HIV. He also worked on creating a vaccine for Ebola and on tackling the SARS coronavirus. (You should probably be warned that, due to Plummer’s work with coronaviruses, online conspiracy theories attempt to connect him with the new coronavirus that originated in Wuhan and go so far as to question whether he was murdered.)

BBC.com profiled Plummer in January 2020 for a story about his struggles with alcohol abuse, a problem that developed as a result of his attempt to cope with stress and grief related to his HIV research by drinking.

He tried support groups and counseling, but they failed to stop him from using alcohol. He decided to become a guinea pig in the testing of a procedure that uses brain implants and electrodes to induce deep brain stimulation (DBS) in specific areas of the brain. DBS is described as a pacemaker for the brain, a way to rewire dysfunctional circuits.

In the article, Plummer reported improvements in his cravings and mood. In fact, thanks to the procedure, he had returned to Kenya to embark on more HIV research.

For more about the scientist, read “Mourning the Loss of Dr. Francis Plummer” from the University of Manitoba, as well as “Remembering Dr. Frank Plummer” from journalist and development researcher Joan Baxter.