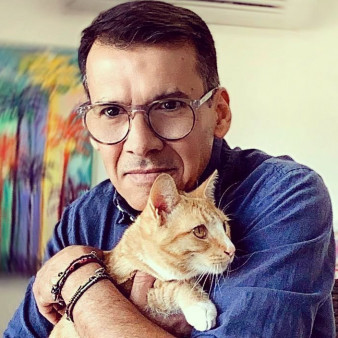 He was dedicated to uplifting Latinos, immigrants and people living with HIV.

Marco Castro-Bojorquez, a human rights advocate and filmmaker, has died. The news of his passing was shared June 2 on social media. The details of his death are not yet confirmed.

Castro-Bojorquez’s death was met with not only sadness but surprise. He had recently returned to the United States from his home country of Mexico, where he spent months finding refuge from the COVID-19 pandemic.

As he shared with POZ in a 2015 interview, Castro-Bojorquez quickly became an advocate for people living with HIV after he tested positive for the virus in 2000.

As a gay Mexican immigrant, he also saw the interconnections between Latinos, immigrants and HIV. Two of his documentaries explore these themes in detail.

Reactions to his death were widespread and heartfelt:

We at Treatment Action Group (TAG) deeply mourn the loss of Marco Castro-Bojorquez, a visionary HIV and human rights activist, artist, and filmmaker. Marco’s light shined brightly throughout his work and lifted up all around him. His work at the intersection of HIV and migrant and undocumented rights, and economic and language justice, was especially important.

Suraj Madoori, TAG’s U.S. and Global Health Policy Director, who worked closely with Marco as co-chairs of the HIV Racial Justice Now Coalition, notes, “Marco was such a kind, gentle soul with a heart that stretched for miles to include anyone who had the blessing to know him. He was the spiritual center of the HIV movement.”

“Marco centered love and joy in his work,” elaborates Edric Figueroa, the ACT NOW: END AIDS (ANEA) coordinator. “The ANEA Coalition was lucky to have him as an expert, cheerleader, and good troublemaker across different programs. His embodiment of the chant and call to action ‘I do believe that we will win’ was contagious and his legacy will live on in our efforts to keep HIV justice intersectional.”

We will strive to honor Marco, and channel his boundless compassion, in our work.

The Latino Commission on AIDS released this statement:

“We will miss Marco, his thoughtfulness, kindness, empathy, compassion, engagement, passion and commitment for the community,” stated Guillermo Chacon, president of the Latino Commission on AIDS and founder of the Hispanic Health Network. “He was able to bring his love for art, his vision and his desire for social justice together in a beautiful. We will miss you Marco dearly!”

Click here to visit a GoFundMe page to raise funds to bring Castro-Bojorquez back to his family in Mexico.