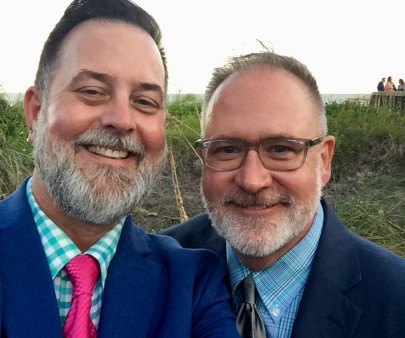 Peter Stinner, a popular HIV tester, educator and activist in Atlanta, died of a heart attack August 16, 2020. He was at home with his husband, fellow HIV and LGBT activist Jeff Graham, at the time, reports Project Q. Stinner was 55.

He had worked as an HIV educator at Grady Health System’s Ponce de Leon Center for two decades.

“He gave people hope and introduced the clinic to our patients. In short, he armed them with knowledge while letting them know they had a team behind them,” Wendy Armstrong, a medical director at the center, told the newspaper. “He was compassionate, patient and able to explain the biology of HIV to anyone, no matter how long it had been since they had had a science class.”

Throughout the 1990s, he worked as a certified HIV tester and educator, volunteering with Atlanta’s AIDS Survival Project and Mercy Mobile.

Stinner was also an advocate for LGBT issues and for homeless people. His activism landed him in jail—and in headlines. In the early 1990s, Project Q reports, when Stinner and his husband were involved with the AIDS Coalition to Unleash Power (ACT UP), a group of activists interrupted a live CNN broadcast to protest the way it reported about a woman who said she contracted the virus from her dentist.

Stinner and Graham met and became friends while in college in San Antonio; Stinner moved to Atlanta to work with homeless people, and the two fell in love after Graham came to visit.

A scholarship fund has been set up in Stinner’s memory, and a virtual celebration of his life is planned for September 10, which would have been his 56th birthday.