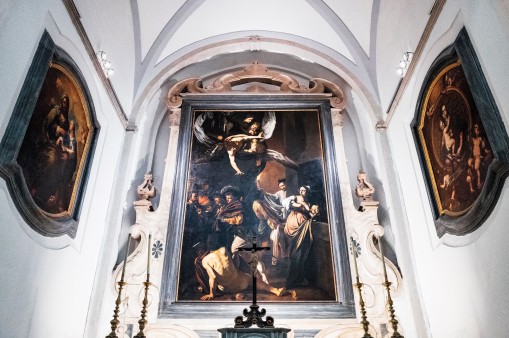 In an opinion piece titled “A Personal Look at Therapy and Loss in the Early Days of AIDS,” psychotherapist Julie List, LCSW, recalls her first client with AIDS before effective treatment. Below is an edited excerpt.

It’s been 20 years since “David” washed down a bottle of Valium with a fifth of vodka, left his wallet and keys on his kitchen table and jumped into the Hudson River. David wrote one suicide note, and it was addressed to me. He attached a postcard to the note: two embracing angels in Caravaggio’s “The Seven Acts of Mercy.”

For nearly two years before his disappearance, David was my patient at a Manhattan outpatient mental health clinic linked to GMHC. This act was what he would have called his “rational suicide,” although the resulting loss for his family, friends, doctors and me was as deep as any other.

As a gay man with AIDS in 1995, prior to the availability of protease inhibitors, David believed that the deterioration of his body and mind was his inevitable future, and he couldn’t bear the thought of wasting away in pain and alone.

When I first met him in 1994, I was a psychiatric social worker with less than a decade of experience doing psychotherapy. I had primarily practiced family therapy with a physically healthy population of mostly straight clients. Not only was David one of my first openly gay clients, but he was also the first to be quite ill with AIDS.

David was a 43-year-old white, non-practicing Jewish artist and writer, in recovery for five years from alcoholism. He had been diagnosed with AIDS less than a year before. His longtime lover had died of AIDS-related illness six years earlier. David’s current on-again, off-again lover also had AIDS but was not as ill as David. David reported to me that all his friends had AIDS.

David was losing weight rapidly. He always wore boots, claiming it made it easier for him to walk with the Kaposi’s sarcoma lesions on the bottoms of his feet. He also had KS on his calf and a few on his nose that embarrassed him. He periodically received radiation treatments to burn the KS off his face.

David was struggling with acute anxiety since his diagnosis. He was immediately matched with our staff psychiatrist. As the year progressed, David became more depressed. David told us that if he started to get sicker without any hope of improvement, he would consider taking his own life while he still had control over his destiny.

As psychotherapists working in the late 1980s and continuing throughout the mid-1990s, we, like our patients, had to come to terms with the fact that there was no foolproof medication regimen to prolong the lives of those we had come to care about. We had to learn to provide therapy to a generation of mostly gay young men whose friends and lovers were dying in droves.

At first, I wasn’t sure I was up to the task. I had little special training for this. I was treating David the only way I knew, not allowing for the possibility that he would die on me. I tried to connect to him as a man living through massive losses, focusing on who he was before the disease and what his passions were.

I don’t remember who called to read me the content of the suicide note: “Julie, please try not to feel bad about this. You’ve done nothing but help me. Thank you forever, D.” I took the blow hard, a punch to the gut. It was a Saturday. I was home that day. David, gone—it was a shocking absence.

The sadness I felt was not only that we hadn’t been able to help him to stay alive, but also the hopelessness about losing all the young people who had been dying for more than 15 years.

Could David still be alive today if he had waited for the medication cocktail no one knew was imminent? We’ll never know, nor will we know whether he would have died on his own instead of taking his own life.