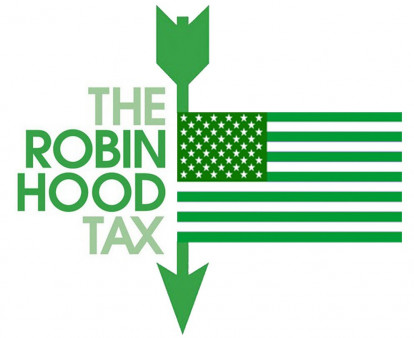 A coalition of activists seeking a Robin Hood Tax demonstrated outside the Waldorf Astoria hotel in New York City before an October 18 dinner honoring President Barack Obama and Republican presidential candidate Mitt Romney, according to a coalition statement. The coalition includes ACT UP, Queerocracy, Health GAP, Housing Works, the Greater New York Labor-Religion Coalition, National Nurses United and the Robin Hood Tax Campaign. The small tax on Wall Street financial transactions would fund programs targeting HIV/AIDS, health care, jobs and climate change. The 0.5 percent tax on stock transactions could generate $350 billion a year. Activists want both candidates to support a bill before Congress to establish the tax. The Al Smith fundraising dinner for charity, named after the former New York governor who became the first Roman Catholic presidential candidate, is an annual gathering of the who’s who in politics.

For more information about the Robin Hood Tax, click here.

Watch video of the protest by LGBT activist Louis Flores: