The ultimate goal is for the U.S. Congress to pass the Inclusive Prosperity Act, a.k.a. the Robin Hood Tax. The law would create a small tax of 0.5 percent on Wall Street transactions. This would raise an estimated $300 billion a year, and the money would go to schools, housing, AIDS meds, local governments, housing and other areas of need.

“It’s a tax for the people, not a tax on the people,” claims RobinHoodTax.org. “This is a tax on the same Wall Street interests that created the greatest economic crisis since the Great Depression—and that continue to reap record profits and bonuses while ordinary Americans cleaned up the mess.

“The Robin Hood Tax is just. The banks can afford it. The systems are in place to collect it. It won’t affect ordinary members of the public, their bank accounts or their savings. It’s fair, it’s timely, and it’s possible.”

The actions and vigils are taking place in April because this month marks 47 years since Martin Luther King Jr. was assassinated while advocating for economic equality. 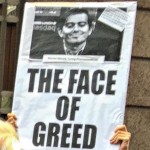 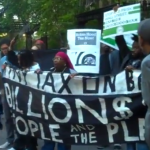