The city launched a program to start people on treatment within six days of diagnosis in 2015.

The San Francisco Rapid ART initiative, which aims to quickly start people with HIV on antiretroviral treatment (ART) following their diagnosis, has showed considerable progress in narrowing the time between diagnosis and full suppression of the virus, Healio reports.

The plan, launched in 2015, defined rapid initiation as starting antiretroviral (ARV) treatment within six days of testing positive for the virus. The ideal goal is to start treatment the same day as diagnosis.

Publishing their findings in Clinical Infectious Diseases, researchers analyzed data on 1,354 people newly diagnosed with HIV between 2013 and 2017 according to the San Francisco Department of Public Health HIV surveillance registry.

Eighty-nine percent of the study cohort members were men; the majority were people of color.

By the end of the study period, the median time between an HIV diagnosis and the first visit to a physician for care for the virus declined by 44%, from nine to five days. The median time between that first medical visit and the initiation of ARV treatment declined by 96%, from 28 days to just one day. By 2017, 28% of those newly diagnosed with HIV started ARV treatment rapidly. 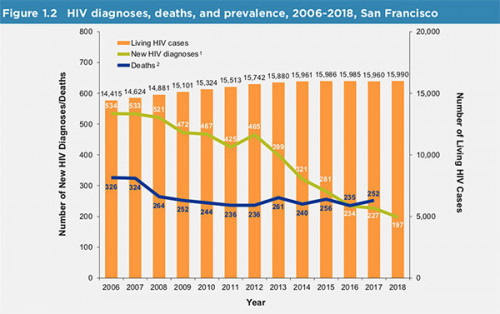 The San Francisco HIV epidemic has been rapidly improving, in part thanks to rapid treatment efforts.Courtesy of San Francisco Department of Public Health

The median time between an HIV diagnosis and the first viral load test with an undetectable result declined by 48%, from 145 days to 76 days.

Those who started ARVs rapidly were 1.17-fold more likely to have a fully suppressed viral load within 12 months of their diagnosis than those who did not start treatment rapidly.

“During a multisector initiative to optimize ART initiation, median time from diagnosis to virologic suppression decreased by nearly half,” the study authors concluded. “Immediate ART at care initiation was achieved across many, but not all, populations, and was associated with improved suppression rates.”