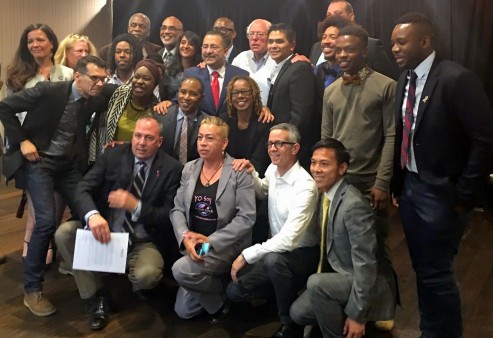 A Surprise Twist After Sanders Meets With 20 AIDS Activists

Presidential hopeful Bernie Sanders met with 20 AIDS advocates from across the nation while in San Bernardino, California, the Washington Blade reports.

Sanders told the group that he was committed to increasing access to generic medications and that the 2016 Democratic Party platform would include a plank regarding the need to increase competition for production of generic HIV drugs.

Hilary McQuie, a member of HIV group Health GAP, attended the meeting and told the Blade, “The expansion of HIV/AIDS treatment globally has only been possible because of the reduction of intellectual property barriers that has allowed generic competition. This has resulted in a 99 percent drop in the price of HIV drugs. It is crucial that barriers to generic production continue to be reduced for new medications. India’s freedom to put public health and access to medicines ahead of pharma greed and U.S. bullying will mean the difference between life and death for millions of people.

Earlier in the month, the AIDS advocates met with Hillary Clinton, who is Sanders’s democratic rival. The group, which represents a much larger coalition of AIDS activists, presented its policy proposal, titled “Revitalizing the United States Response to End AIDS as an Epidemic,” to each candidate.

The Sanders meeting took place Wednesday, May 25. The next day, his campaign issued a press release on the meeting. Titled “Sanders Backs California Ballot Initiative to Rein in Drug Prices at Meeting with HIV/AIDS Advocates,” the press release begins with this paragraph:

SAN BERNARDINO, Calif. — U.S. Sen. Bernie Sanders on Wednesday met with national HIV/AIDS advocates to discuss the epidemic and his support for a California ballot initiative to lower prices for taxpayer-supported AIDS treatments.

The press release has not gone over well with lead advocate Peter Staley, who took to Facebook to say, “Feeling used and abused by the Sanders campaign right now. They just issued a press release making it sound like our meeting was about his endorsement of AHF’s drug pricing ballot initiative in CA. Senator Sanders never brought the issue up during our meeting. WE brought it up near the end.…”

Below are a series of Staley’s posts regarding the meeting.