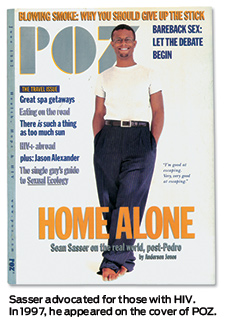 You probably know Sean Sasser as the partner of Pedro Zamora on MTV’s The Real World: San Francisco. Both men were HIV positive, and shortly after the last episode aired in 1994, Zamora died of AIDS. In August 2013, Sasser died of mesothelioma, a rare lung cancer. He was 44. At the time, Sasser was living in Washington, DC, with his partner Michael Kaplan, president and CEO of AIDS United.

POZ blogger Shawn Decker recalls watching that groundbreaking TV season: “I fell in love with both of them. They offered a glimpse into a future I desperately wanted—the ability to talk to friends about HIV (something I had not yet done at age 18) and finding a partner that I could share my life with. The impact of Sean Sasser and his Real World alum has never been lost on me. Before any of us could crack a laptop or iPhone and search ‘living with HIV,’ there was that group of young people dealing with HIV, conveniently bringing the topic into our living rooms. I needed that. And so did a lot of other people.”