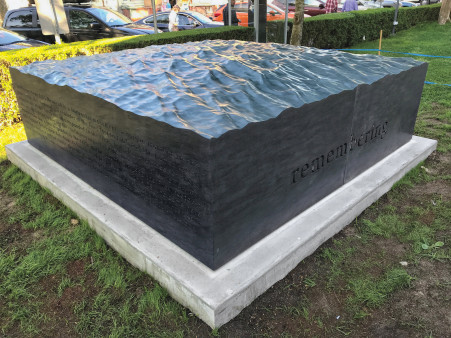 Long before the first cases of AIDS were reported in the early 1980s, Provincetown, Massachusetts, was a fabled vacation spot for the then-underground LGBT community. Hit hard by the epidemic, the Cape Cod community offered respite and comfort to people who were dying of and living with HIV.

This summer, tourists in Ptown, as it is affectionately called, had a new site to visit: the Provincetown AIDS Memorial. Designed by sculptor and installation artist Lauren Ewing, who lives part-time in Ptown, the memorial stands 3 feet tall and 9-by-9-feet square; it’s made of nearly 17 tons of carbon gray quartzite.

“It is a unique physical object that is polyvocal,” Ewing tells POZ, meaning that the memorial includes many voices and narratives. “It stops one ocean moment in time,” she says. “As a physical object, it will endure even with sea level rise on this fragile peninsula.”

The memorial’s top resembles the surface of the ocean. The word remembering is carved into two sides. Another side’s inscription describes the memorial as a “horizontal monument” that’s “a reminder of the lives lost to AIDS and the humanitarian achievements of the caregivers who responded to the crisis.… In 1983 the Provincetown AIDS Support Group opened its doors to hundreds of people living with AIDS who came here seeking assistance and treatment. Here they found open minds, big hearts and an interest in their well-being. Provincetown’s commitment to being a caring community continues today.”

On the remaining side, lines by local poets combine to create this text:

Steve’s / holding Jerry, though he’s already gone, / Marie holding John, gone, Maggie holding / her John, gone, Carlos and Darren / holding another Michael, gone, and I’m holding Wally, who’s going. * Transcendence might be the term Emerson would lend it. / What I’m trying to say is that it wasn’t lonely. * Look: I am building absence / out of this room’s air * We are all made of / our own people laying names on the ground * Most of it happened without music, the click of the spoon from the kitchen, / someone talking, somebody sleeping / Someone watching somebody sleep. 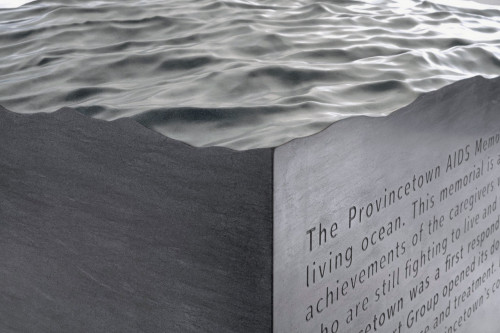 ACT UP Protesters at the WhitneyCourtesy of Lauren Ewing