Checking in with our cover babies and their HIV-positive parents

This time last year, the cover of POZ starred two of our most popular models ever: Mila Vreeland and Memory Amya Hunte. At just a few months old, both babies were born to families affected by HIV. Mila’s father, Reed, and Memory’s mother, Lolisa, have undetectable viral loads. Thanks to treatment as prevention (TasP) and pre-exposure prophylaxis (PrEP), their baby girls were born without HIV.

We’re happy to report that both families are doing great. “Being a father has completely changed my life for the better,” first-time dad Reed tells us. “I now look at how many things Mila’s learning and realize how much room there is for me to grow and thrive. I’m more focused on maintaining my long-term health. But it can also be very difficult to balance your health with all the responsibilities of having a small kid.”

Meanwhile, Memory is Lolisa’s second child. “Having children has not changed my viewpoint or health in any way when it comes to being HIV positive,” she says, adding that other folks still seem shocked to learn that she has HIV but her husband and children don’t.

Anna Shevel-Vreeland, Mila’s mom, who went on PrEP while conceiving, says she often has to educate people about transmission risks. Not that it’s a bother. “I actually find it empowering,” she says, “to give people a more accurate understanding of HIV and the current science.”

Both families offer the same advice to other folks with HIV wanting to become parents: Talk to your doctors, and don’t let HIV get in your way. 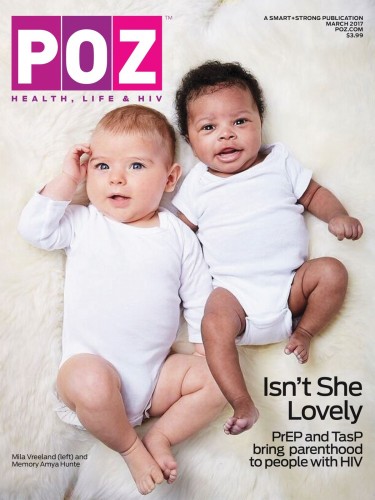 Mila and Memory on our March 2017 cover