UPDATE: Data from 2019 and 2020 have been added to America’s HIV Epidemic Analysis Dashboard (AHEAD), an interactive digital map.

UPDATE: The Department of Health and Human Services (HHS) has updated the interactive digital dashboard that tracks HIV data. “Along with 2017 and 2018 data, stakeholders can now see provisional 2019 annual data for all six indicators, and preliminary 2020 annual diagnoses data, and 2020 cumulative quarterly data for linkage to care and PrEP coverage indicators,” writes the HHS in a May 28 announcement. More details about the dashboard are in the original April 13 POZ article below. To learn more about recent HIV data released by the Centers for Disease Control and Prevention, see “New CDC Data Show Decline in HIV Cases, Rise in PrEP Use.”

We’re often hearing about efforts to end HIV/AIDS on the global, national and local levels. Now you can get a better idea of whether your state (or your county) is on track to meet the goals set forth in the 10-year federal initiative “Ending the HIV Epidemic: A Plan for America,” which launched in 2019.

Last September, HIV.gov added the America’s HIV Epidemic Analysis Dashboard (AHEAD) to its site. The interactive map tracks data relevant to the federal HIV plan. It contains data not just on all 50 states but also on 48 counties plus Washington, DC, and San Juan, Puerto Rico. The U.S. HIV plan highlighted these jurisdictions as areas of concern because they accounted for more than 50% of new HIV cases in 2017 to 2017.

According to HIV.gov, annual and quarterly data are now available for these jurisdictions and the 50 states. Click on yours to find analytics on:

Incidence: the estimated number of new HIV infections in a given year;

Knowledge of status: the estimated percentage of people with HIV who have received an HIV diagnosis;

Diagnoses: the number of people with HIV diagnosed in a given year confirmed by laboratory or clinical evidence;

Linkage to HIV medical care: the percentage of people diagnosed with HIV in a given year who have received medical care for their HIV infection within one month of diagnosis;

Viral suppression: the percentage of people living with diagnosed HIV infection who have less than 200 copies of HIV per milliliter of blood in a given year.

PrEP coverage: the estimated percentage of individuals prescribed the daily HIV-prevention pill PrEP (pre-exposure prophylaxis) among those who need it.

The website cautions, “Data for the years 2019 & 2020 are preliminary. Due to the impact of the COVID-19 pandemic, interpret with caution.” 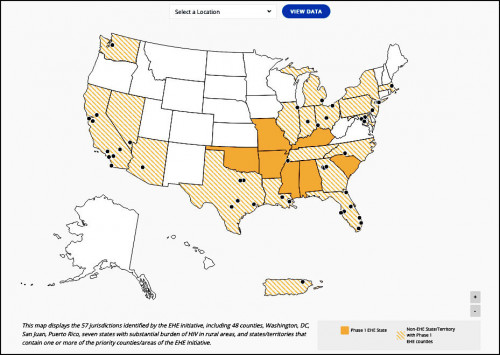 “Ending the HIV Epidemic” aims to lower new HIV rates by 75% by 2025 and by 90% by 2030. This would amount to fewer than 3,000 HIV cases a year. “Reducing new infections to this level,” according to the initiative, “would essentially mean that HIV transmissions would be rare and meet the definition of ending the epidemic.” The strategy for reaching these benchmarks involves investing federal funding and resources in 57 key jurisdictions. This translates to the 48 counties plus Washington, DC, and San Juan, Puerto Rico, that together account for 50% of new HIV cases plus seven rural states with high HIV burdens: Alabama, Arkansas, Kentucky, Mississippi, Missouri, Oklahoma and South Carolina.

What’s more, the plan focuses on four pillars of action:

To learn more about the “Ending the HIV Epidemic” initiative, read an overview at HIV.gov and visit the official webpage at HRSA.org. For a related POZ article, see “Plans to End the HIV Epidemic at Home and Abroad.”

In the United States, PrEP is available as the daily tablets Truvada and Descovy; both are manufactured by Gilead Sciences and consist of two meds. A generic version of Truvada became available last fall. To learn more, see “What’s the Difference Between Truvada and Descovy for PrEP?” and “Prevention: Generic Truvada.” For more general information, see the POZ Basics on HIV Prevention.