Kalee Garland is on a mission to end HIV-related stigma.

Until 1993, Kalee Garland didn’t know much about HIV except what she saw on television. That was the year she tested positive for the virus and received an AIDS diagnosis. She was 7 years old.

Unbeknownst to her family, Garland was born with the virus. She had acquired it from her mother, who until Garland’s diagnosis had been unaware of her own status.

“My mom broke down crying and told me that we both have this bug in us,” says Garland, a 35-year-old HIV advocate from San Diego. “She said it was HIV.”

With help from the Elizabeth Glaser Pediatric AIDS Foundation, Garland’s parents enrolled her in two HIV drug clinical trials run by the National Institutes of Health. While both trials were hard on her young body, she fared slightly better in the second one.

“The pills [in the second trial] melted in my mouth,” she says. “I was 10 years old and had more control because I wasn’t getting liquid medications shot into my mouth [like in the first trial].”

But as a teen, Garland stopped taking her HIV meds and became very sick. She developed meningitis four times between ages 16 and 18.

“I got down to 80 pounds, and people would look at me so crazy,” she recalls. “It made me think about the luxury I had to not have my sickness show as a child.”

As a youth, only Garland’s family and close friends knew she had HIV. It wasn’t until early adulthood that she began to publicly tell people that she was living with the virus.

At age 19, she became a counselor to young people impacted by HIV at Camp Heartland (now One Heartland) in Minnesota. It was the same camp she’d attended as a child. As a counselor, she talked about growing up with HIV.

“It was very cathartic to start to speak and share my story,” she says. 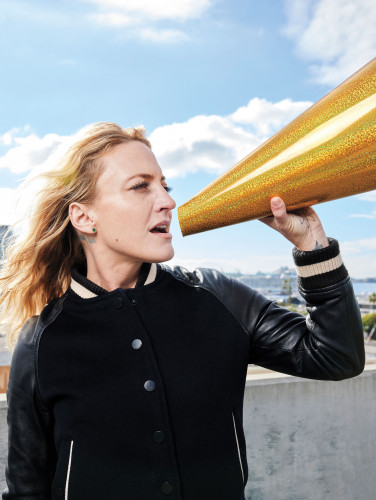 In 2020, Garland took a leap of faith and created the Instagram account @aidsbaby86. In her first post, a two-minute video, she explained why she chose that name for the social media feed and shared what her life had been like as a person living with HIV.

“Life came hand in hand with HIV,” she explained in the video. “And I am extremely proud of all my experiences, and they’ve shaped me for who I am. I would not change them for the world.”

Garland was surprised by all the support and love she received in the comments to her post and found a new sense of purpose. These days, she uses Instagram to raise HIV awareness, encourage people to get tested and fight HIV-related stigma.

“There is a war on stigma,” Garland says. “Stigma is hurtful, and it needs to be stopped.”

Garland wants to continue working with children and to help those living with HIV transition into healthy adults as they age with the virus. To that end, she hopes to one day open a foster home for kids.

In the meantime, she will continue to be a cheerleader for the HIV community, speaking out for those living with the virus and amplifying their voices.

“HIV is an acronym, and the first word is human,” Garland says. “We are all having a human experience.”