From left: Robert Waldron, Howard White and Frank Ambriz of GRIOT Circle at Out of the Closet thrift store in Brooklyn to launch “Still Standing” Trenton Straube

Here’s a challenge: How do you let senior citizens know they are at risk of HIV and that if they’re already living with the virus they can enjoy a fulfilling future? The folks at Brooklyn’s GRIOT Circle, a group for LGBTQ elders of color, came up with a fantastic solution: a campaign called “Still Standing: Aging Gracefully and Positively” that includes posters and events highlighting the life stories of three older men of color living with HIV.

Appearing in New York City the first week of February, the campaign includes a series of ads on bus stops, as well as the video below, which is posted on social media. The project was launched with a panel discussion and unveiling at Brooklyn’s Out of the Closet thrift store, which houses a pharmacy and provides HIV testing and services. (AIDS Healthcare Foundation operates the store and funded the “Still Standing” campaign.)

“This initiative is for someone like me,” acknowledged GRIOT’s Aundaray Guess as he introduced the program. “As I’m getting older, I recognize that HIV messaging out there doesn’t look like me,” he explained, pointing out that most ads feature six-pack abs, not gray heads of hair. Older people, said Guess, who is also a POZ blogger, aren’t often offered HIV tests, and many don’t even know they’re at risk.

GRIOT Circle—the letters stand for gay reunion in our time—states that the intent of the “Still Standing” project is “to use the diverse personal stories of the HIV-positive men’s support group as an educational framework with which to discuss the unique mental and medical challenges presented by the disease. The purpose of this project is to promote the importance of access to quality HIV care, highlight the unique medical challenges that managing the disease and chronic illnesses uniquely present to the aging process, destigmatize the shame surrounding disclosure and discuss the many barriers that exist as it relates to the elderly population and HIV testing and care…. The ultimate goal of the project is to spread a message of prevention for all individuals—young, elderly, gay, straight, bisexual, gender-non-conforming, infected and non-infected.”

The men who star in the campaign—Frank Ambriz, Howard White and Robert Waldron—spoke at the launch, telling the audience about their hopes for the campaign and what it was like to go public with their life stories. 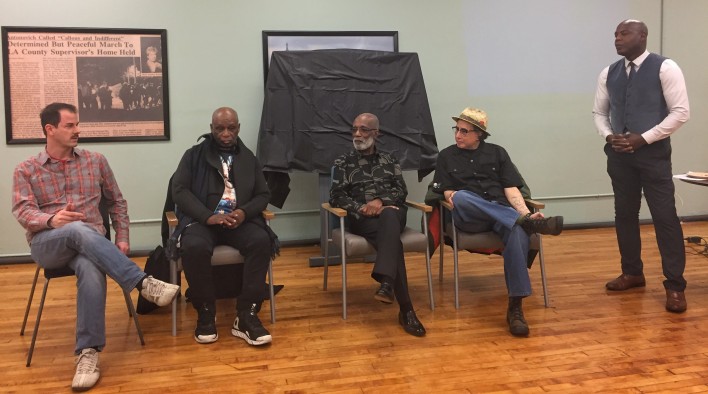 From left: Alan Bounville, Howard White, Robert Waldron, Frank Ambriz and Aundaray Guess at Out of the Closet thrift store in Brooklyn for the launch of “Still Standing”Trenton Straube

“For me, it was hard,” said Ambriz, who noted that in his Mexican-American culture, people are not so open about HIV and sexuality. “But I felt it was my duty to tell my story so that people could see me and think it’s OK to be HIV positive or have AIDS or be over 50 and be gay. Life doesn’t stop here. It’s OK to be you.”

White agreed that it was challenging to recount his life. “It was painful because I had to go over some ugly memories, but I’m here to tell the story regardless of how graphic it can be.” At the end of the process, he said, “It was like a burden being lifted. I feel good about it.”

Waldron, who is Caribbean American, found the “Still Standing” experience to be empowering. “I want to put my story out there. I love life and want to share it,” he said. “If someone can take away from my story and make their life better, I’d be so happy.”

You can read more about these men in our article “HIV-Positive Older Men of Color Tell It Like It Is, Sex and All.” 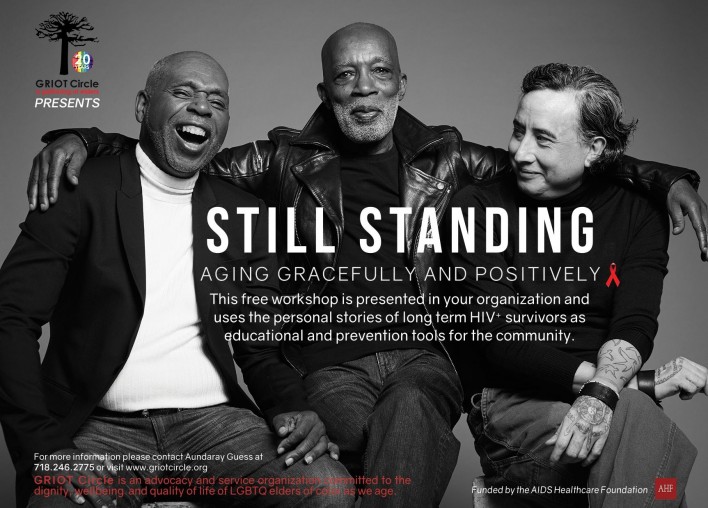