A CDC campaign returns with new faces and a timeless message.

While growing up, David Massey witnessed his family serve food to an HIV-positive relative on a separate set of dishes. He never forgot that stigmatizing message. When Massey tested positive for the virus, he vowed that nobody would know.

Stigma remains a major barrier to HIV prevention, testing and treatment. That’s why, in order to beat the epidemic, we must confront stigma. To that end, the Centers for Disease Control and Prevention (CDC) relaunched the 2012 campaign titled “Let’s Stop HIV Together.” What, exactly, is HIV stigma? The nationwide campaign defines it as “negative attitudes and beliefs about people living with HIV. It is the prejudice that comes with labeling an individual as part of a group that is believed to be socially unacceptable.”

The campaign includes posters, web banners, videos, fact sheets, social media posts (search #StopHIVStigma and #StopHIVTogether) and a guide to talking about the virus in language that isn’t stigmatizing—for example, instead of saying “HIV patient” or “AIDS victim,” you can say “person living with HIV” or “HIV-positive person.”

What’s more, the reboot stars a new roster of folks surviving and thriving with the virus. Massey is one of them.

“I realized that if stigma was going to be broken, it had to start with me,” Massey, who lives in Atlanta, tells POZ. After keeping silent about his HIV diagnosis for three years, he disclosed to his relatives (they are religious). Turns out, the family members were supportive and loving. 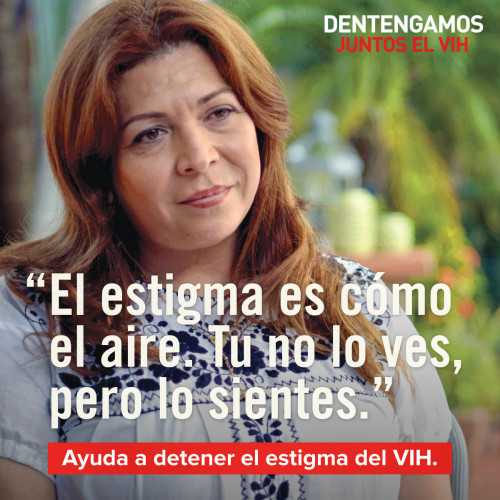 A Spanish version of the campaignCourtesy of CDC

The disclosures didn’t stop there. Five years ago, on a first date with Johnny Lester, who is HIV negative, Massey told him that he has HIV. Today, they’re engaged.

They’re also outspoken advocates on many forums—POZ readers will recognize the “David & Johnny” brand and the Table Talk videos they regularly post on POZ.com/blogs.

“We wanted to show people that HIV does not slow me, him or us down,” explains Massey about the couple’s involvement in the “Let’s Stop HIV Together” campaign. “We still have work to do and lives to live.”