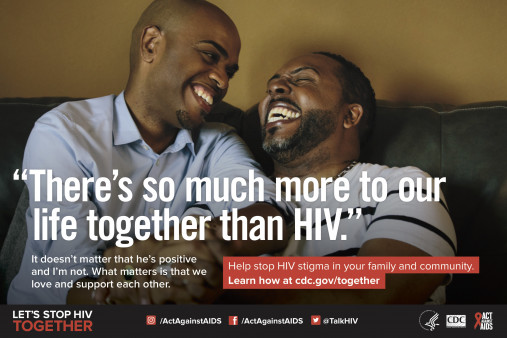 David L. Massey and Johnny Lester Courtesy of the CDC

The campaign features people living with HIV and their loved ones.

It took David Massey nearly three years to disclose his status to loved ones after he tested HIV positive. He knew all too well how HIV stigma affects people living with the virus.

Massey distinctly remembers how differently his family treated one relative in particular, even going so far as to serve him meals on separate dishes. Massey would later discover that this relative died of AIDS-related complications.

“When I was diagnosed, one of the things I carried with me was that nobody could know,” says Massey, an HIV advocate and public health worker from Atlanta. “Nobody would ever know what was going on if I was to ever get sick.”

According to the Centers for Disease Control and Prevention (CDC), an estimated 1.2 million people are living with HIV in the United States, and 37,600 new cases are diagnosed each year. What’s more, stigma remains a significant barrier in accessing HIV prevention, testing and treatment services.

HIV-related stigma also causes many people living with the virus to be depressed, isolated and afraid of disclosing their HIV status. As a result, the CDC considers addressing HIV stigma to be part of its mission to end the epidemic.

The initiative consists of posters, web banners, a stigma fact sheet and a language guide as well as video stories from people living with HIV and their loved ones. Materials are also available in Spanish.

Folks are also encouraged to create their own social media posts and use the hashtags #StopHIVStigma or #StopHIVTogether to initiate conversations about HIV. 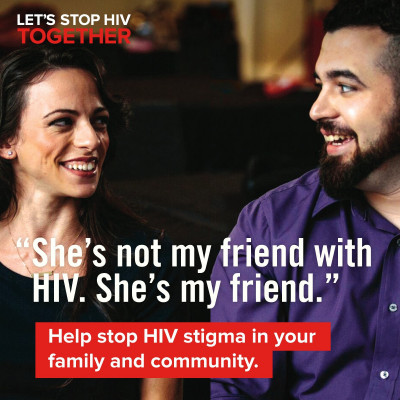 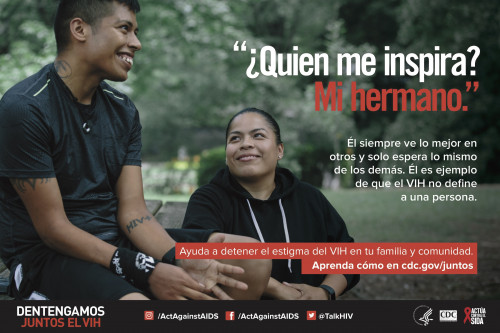 The CDC launched “Let’s Stop HIV Together” in 2012 as part of its five-year $45 million national communication effort known as “Act Against AIDS” (AAA). The goal of AAA is to combat complacency about HIV in the United States by raising awareness among all groups of people while also reducing HIV risk among the hardest-hit populations.

Currently, seven active campaigns under AAA target various communities with a higher risk for HIV as well as health care providers and the general public.

“Doing It,” a national bilingual campaign that encourages all adults to get tested for HIV and to know their status, includes video testimonials from people living with HIV and celebrities such as Daniel Franzese from the movie Mean Girls and Mom’s Jaime Pressly.

“Start Talking. Stop HIV” seeks to reduce HIV cases among men who have sex with men by promoting open dialogue about safer sex practices. The campaign addresses such practices as condom use, pre-exposure prophylaxis (PrEP), HIV testing and the concept of “Undetectable = Untransmittable” (U=U) and even offers conversation starters for those who may need them.

For “HIV Treatment Works,” people living with HIV from across the country discuss how maintaining care and treatment has led them to living longer, healthier lives. The initiative provides tips on how to get into and remain in care as well as how to live well with HIV.

The campaigns intended for providers include “Prevention IS Care,” “HIV Screening. Standard Care” and “One Test. Two Lives,” all of which encourage doctors to help reduce risky behaviors, increase routine HIV testing and prevent mother-to-child transmission of the virus. 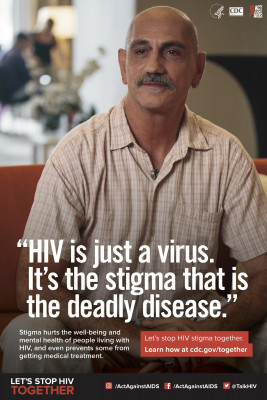 Among those offering insight into their own lives for “Let’s Stop HIV Together” are Massey and his fiancé, Johnny Lester, who is HIV negative. “I’m just one side of the equation,” Massey says. “My partner is another side that we [AIDS educators] are not talking to. He has to live with it too.”

The most important part of the campaign, Massey says, is that it shows an array of personalities and people living life beyond their HIV diagnosis. Massey believes it also further pushes the message that HIV knows no boundaries and can touch everyone.

Cameras trailed the couple for one day in an effort to capture their story for the campaign. “We wanted to be able to show people that HIV does not slow me, him or us down,” explains Massey. “We still have work to do and lives to live.”

Massey told Lester that he was living with HIV on their first date. They have now been together for more than five years.

It was Lester who encouraged Massey to go public with their story as a serodiscordant couple—one in which one person is HIV positive and the other isn’t—thus helping to launch their brand, David & Johnny.

“We do a lot of things together and separately,” says Massey. “But we’re always in the fight. We’re always activists and open to people asking questions.”

As partners, Massey and Lester haven’t been immune to stigma. In the past, some of Lester’s family members have voiced concerns about his relationship with Massey.

Relatives once contacted Lester’s aunt to warn her about Massey. His aunt, however, quickly educated them about their relationship.

“I’m glad that we even have advocates in our own families that we’re able to educate to be able to say to other people in the family, ‘Hey, this is something that they deal with on a daily basis from outsiders. We definitely don’t need them to have to deal with this from the people they call family,’” Massey says.

Disclosing his status was especially difficult for Massey, whose family is very religious. But when he finally told his relatives in 2012, their reaction was very loving and caring. His parents and five siblings continue to support him in everything he does.

“I realized that if stigma was going to be broken, it had to start with me,” Massey says. “I had to reveal some things about myself that I previously said I wouldn’t to my family, friends and coworkers. When I did, it was the most liberating thing I could have ever done.”

To read the David & Johnny blog on POZ.com, click here.