From left: Peter Staley, Robert Garcia (on the book cover), and Mona Bennett Courtesy of “The AIDS activist project” photographs by Bill Bytsura

Stories Behind the Portraits in “the AIDS activist project” [SLIDESHOW]

Photographer and ACT UP member Bill Bytsura guides us through his decades-in-the-making book.

Flip through the pages of the AIDS activist project, and you’ll come face to face with the heartbreak and horror, the anger and inspiration of the early epidemic. In nearly 60 black-and-white portraits, spanning 1989 to most of the ’90s, photographer Bill Bytsura profiles members of the activist group ACT UP, or AIDS Coalition to Unleash Power. Alongside almost every portrait is a reproduction of a short statement by the subject—typed or handwritten or culled from a related profile on the subject—that Bytsura requested when he photographed them, such as the example below of a spread in the book. 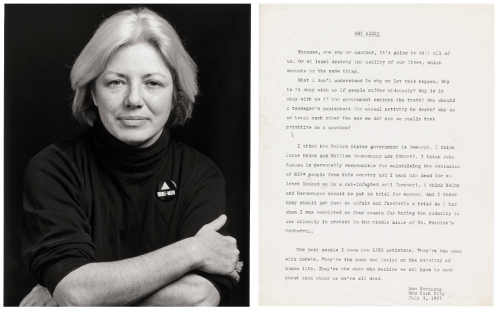 Ann Northrop, ACT UP New York, NYC 1992, and her statementCourtesy of “The AIDS activist project” photographs by Bill Bytsura

The result, as you flip through the pages, is a mesmerizing piece of history, filled with unexpected details and personalities. Bytsura recently stopped by the POZ offices in New York with his book to walk us through the project (you can order the book and learn more about it on theAIDSactivistproject.org). The interview has been edited for clarity and length.

The book starts with a two-page foreword by David France, of How to Survive a Plague fame and then a two-page dedication by you to Randy Wayne Northup, your partner of seven years who died of AIDS-related complications in 1988. Through that, we get some of your background, for example, that you joined ACT UP New York a few months after Randy’s death. Did you always envision doing a book?

Yes. I always planned that. I started this in like early 1989. I remember we tried to get funding and sent it to publishers—this was in the ’90s—and you’d get [responses] like “We did two AIDS books this year and can’t take on another because we don’t make any money.” As time went on, HIV became more manageable and treatments came out, and that sort of desperation went away, then interest in [the book] waned a little bit. In, probably, 2000, someone from Aperture [a photography foundation and magazine] came to my place, and we laid out the portraits, and he said, “They’re great, very publishable but not now, in 25 years.” And that was almost 20 years ago. Then I did a Kickstarter [fundraising campaign for the book] in 2014 that failed and another in 2015 that succeeded [so I published the book myself]. 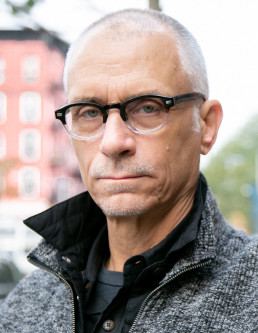 I say [this project] justifies my existence on this earth. Whatever the thing I have that made me do this, I’m happy and proud it’s done and exists. It’s not about my ownership; it’s more about the people in the book.

Tell us about some of them, starting with your partner Randy.

We met in ’81 and I moved in like two days later. [Laughs] Well, not two days but quick. He worked at a bar, The Works, and he managed a coffee shop. I remember we had been together like six years, like a pseudo-married couple, and him saying, “I know we’re not having sex anymore and if you want to see other people that’s OK, just be careful.” I said, “I love you, why would I want to do that?” Then he had night sweats and started losing weight and got fired from his job. I think I was in denial. The March before he died, he went to the park with me and the dogs, and when I now look at those pictures, it’s like the Holocaust, so skinny. People would ask me, “Does he have AIDS?” And I’d get defensive, like “Fuck you, as if every gay man has AIDS now.”

After he passed away [in 1988], I was going through his papers, and I found a report from the department of health that he had tested positive in 1986. And he never told me about it. That still bothers me today. Not because he didn’t share [the information] but that it must have been such a [terrible feeling for him] at that time.

Were you guys active in politics or activism?

No. We had mostly straight friends. We weren’t big in the gay community in any way, except through the bar. When he died, a friend said to me, “Go to ACT UP. You’ll meet people who understand what you’re going through.” I remember the first couple of meetings, and people were screaming at each other, and I was like [cringing] in the back.

Why did you return?

I wanted to do something. And maybe it was curiosity. ACT UP has committees, and Jay Blotcher was at the media committee, and I gave him my information, said I was a photographer—I did freelance stuff, weddings, headshots, corporate events—so I started shooting ACT UP demonstrations. I was at the meetings, so I knew what the plans were, like, “Hey, at 10 o’clock, there’ll be a die-in,” so I could position myself [to get good photos].

You include a collection of those shots in the book.

Yeah, to break up the portraits. [He flips through the book to a spread of action shots, including a guy seemingly passed out on a blanket.] This is Tim Bailey, and he had just died. They made the announcement at an ACT UP meeting. Once in a while, I’d get [an urge to get a specific shot,] like I really had to have this photo. So I went home—no cell phones then—and called his apartment, where he was when he died. [An ACT UP member answered] and I said, “This might sound really weird and you can say no, but I’d really like to come over and take pictures; I don’t even know for what reason.” And she was like, “Let me call you back.” They discussed [and let me come over]. So I went, and like eight people were there. They were the Proud Marys [an ACT UP group that did their own actions, notably political funerals].

Wait. Tim Bailey is actually dead in this photo? And there’s a cigarette in his hand?

[Nods yes] It wasn’t until we put this photo in [the book] that I noticed it after all these years! They put that cigarette in his hand. [Shrugs and kinda laughs] That was ACT UP, you known what I mean? It was a little morbid humor.

Tell us about the image on the cover.

Robert Garcia. We did a regular shoot, a portrait. And then I was like, “You want to do a ‘Vogue’ kind of thing?” [a reference to the Madonna song, a huge hit at the time]. And he said yeah, so I got this shirt that’s a little too big, and we put on the fan and, yeah, it’s a great shot. [Editor’s note: The text in the book notes that the photo was shot in 1990 and that Garcia died in 1993 at age 31.]

Did you shoot the New York images in your own studio?

Yes. And others at international AIDS conferences; I would set up at, like, a coffee shop space.

Is everyone in the book an ACT UP member or just an AIDS activist in general?

Because I have a total of 225 portraits [of activists], I had to narrow it down for the book. So the first edit was [they had to be in] ACT UP. At first, I started with volunteers [who wanted to be photographed], then we put fliers out on ACT UP tables and people would call and say, “I’ll do it.” I’d say, “OK, but just as long as you write something—whatever you want—to go with the photograph. And whatever you want for the photograph is OK—nude or whatever.” But my thing was, it had to be black-and-white, and I wanted the focus on faces and bodies.

I notice there are props in some of the images.

[Bytsura opens the book to the spread of Juan Mendez, photographed in 1991. He’s sitting in a chair and behind him are a candle and a framed image of the Virgin Mary on a desktop.] Juan brought all this stuff with him because he wanted to show he’s turning his back on the church. That was probably the most complicated one.

[We flip through the pages as we talk, and Bytsura points out various portraits.]

Ann Northrop. She was always like the den mother of ACT UP, the wise mom, I thought. I hadn’t seen here in so long and ran into her at Gay Pride and she comes and gives me this big hug and kiss. There’s no “Why haven’t you called?” There’s a camaraderie with ACT UP, like a family.

And Peter Staley. You heard of the Wall Street action, right? This picture to me, Peter seems like, “Hmm”—not sneaky but “I’m planning something.” Robert Garcia. Some of these people had HIV and were on TV, like “Don’t be ashamed. It’s OK.” Some are dead now. If it wasn’t for ACT UP, gay marriage might not be here. People were on TV, getting arrested. They didn’t give a shit. They pushed boundaries and [the public] got used to it. 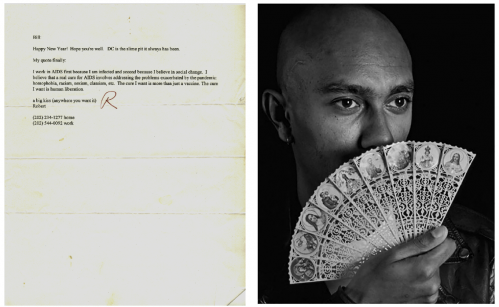 Robert Vazquez-Pacheco, ACT UP New York, NYC 1989, and his statementCourtesy of “The AIDS activist project” photographs by Bill Bytsura

Oh, and this sign: “Welcome to Georgia Sodomites” [the sign hangs behind the 1992 portrait of Mona Bennett]. ACT UP went to Georgia to the [Centers for Disease Control and Prevention, CDC], so ACT UP Atlanta met them at the airport with this sign. Mona wanted to be photographed with it.

Aldyn McKean. He lived across the street from me. The first time I shot him, he was on dialysis. He had the tube and was swinging it. It was an OK photo. Then he called me up one night and said, “I’m going to an opening at the Museum of Modern Art and this might be the last chance to see me in a tuxedo.” So he came over and we did the shoot. [That was in 1992; he died two years later.] Little stories like this that stuck with me—I include them in the book.

You have over 150 portraits and personal statements we have yet to see. What’s happening with those?

In 2011, Marvin Taylor from the Fales Library & Special Collections [at New York University] came by to look at [the work] and said, “We’d like to have it in our archives.” They came by and took boxes of negatives and put it all in order. So that’s taken care of. There’s certainly enough for another book. If this sells and there’s some cash, I might do that.

To learn more about Bytsura’s project and to order the book, visit theaidsactivistproject.org.