The death rate has surged in areas of Kentucky, West Virginia and Ohio where injection drug use also poses a high risk of HIV and hep C.

The U.S. death rate related to substance abuse and mental illness has increased nearly three-fold since 1980, with greater than 10-fold surges in clusters of counties in Kentucky, West Virginia and Ohio, Medical Xpress reports. This is according to a new study that has provided the most comprehensive look ever at causes of death among United States residents.

In June 2016, the Centers for Disease Control and Prevention (CDC) issued a warning to health departments in 220 counties that the agency determined were at high risk of HIV and hepatitis C virus (HCV) outbreaks resulting from high rates of injection drug use. More than half of the counties identified are in Kentucky, Tennessee and West Virginia.

Publishing their findings in the Journal of the American Medical Association, researchers for the new cause of death study analyzed death registration data from the National Vital Statistics System to estimate annual county-level death rates for 21 causes of death. Between 1980 and 2014, 80 million deaths were recorded. The researchers codified 19.4 million of them and analyzed death rates for 3,110 counties or groups of counties.

Looking just at causes of death in 2014, the researchers found that cardiovascular diseases were at the top of the list, responsible for 846,000 deaths and 11.7 million cumulative lost years of life. The death rate for this collection of diseases tended to be the highest along the southern half of the Mississippi River.

Cirrhosis and other chronic liver diseases were responsible for 56,200 deaths in 2014 and 1.5 million cumulative lost years of life. Between 1980 and 2014, there were 1.5 million deaths due to these causes. Overall, the death rated declined 15.6 percent during this period but increased in 69.6 percent of counties, with a statistically significant upward shift in 25.9 percent of counties, meaning that the change in these counties likely did not occur by chance. The death rate saw its greatest rises in southwestern Oregon and northwestern Texas.

As the population living with hep C ages, the virus is increasingly a major driver of cirrhosis and chronic liver disease in the United States.

Mental and substance use disorders ranked 12th as a cause of death in 2014, responsible for 43,100 deaths and 1.8 million lost years of life. There were very high related death rates in a cluster of counties in eastern Kentucky and southwestern West Virginia; in counties in North Dakota, South Dakota and in southwestern states with Native American reservations; and in Alaska. Between 1980 and 2014, the related national death rate increased 2.88-fold, rising in almost every county and leaping more than 10-fold in clusters of counties in Kentucky, West Virginia, Ohio, Indiana, western Pennsylvania and east-central Missouri. 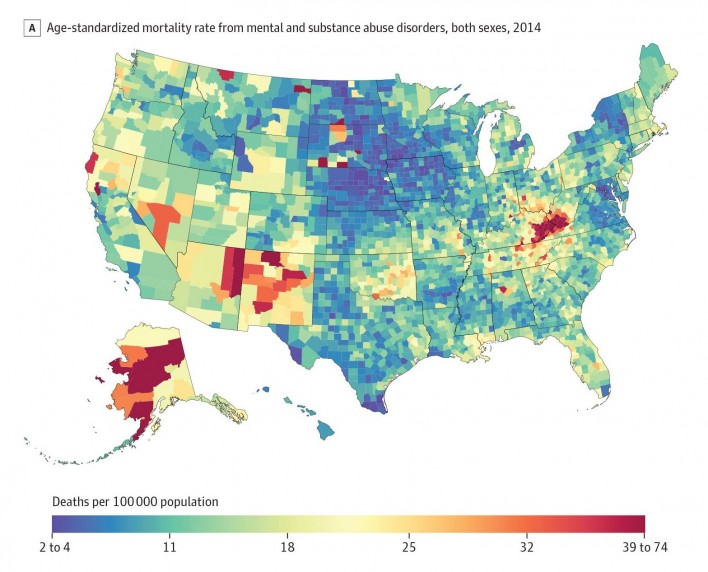 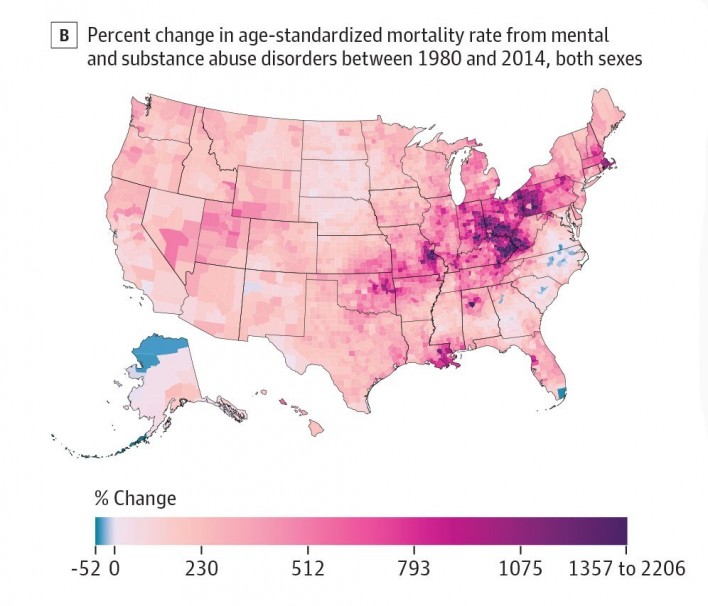 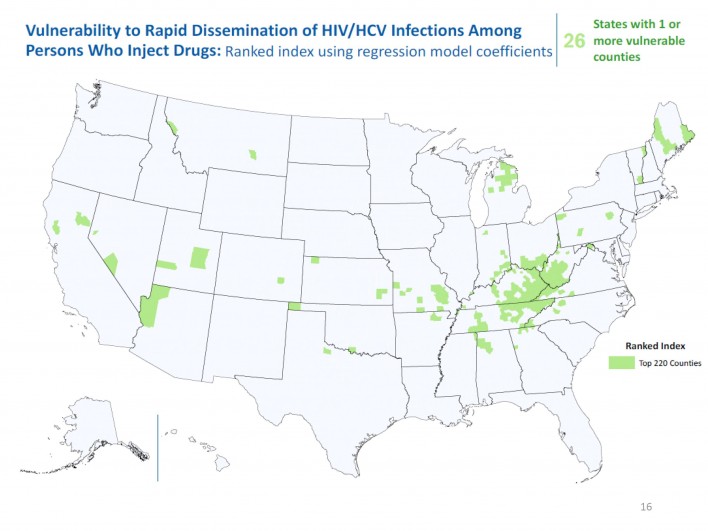