With the HIV population aging, it is increasingly at risk of such age-related cancers.

As the overall death rate among people with HIV has fallen, the population’s cancer-related death rate has risen as a result of increasing rates of various cancers not related to the virus. The aging of the HIV population may drive this phenomenon, considering that close to a majority are now age 50 or older and many of these non-HIV-related cancers are age-related.

These findings come from an analysis of the HIV population in New York City. Home to one of the largest numbers of people living with the virus, the city has seen about 240,000 people diagnosed with HIV or AIDS since the start of the epidemic. About 117,000 have died there of HIV-related causes as of 2015. That year in particular, HIV-related diseases were still the leading cause of death among HIV-positive New Yorkers, at 31 percent, followed by cancer, at 21 percent, and cardiovascular disease, at 17 percent.

Presenting their findings at IDWeek 2017 in San Diego, researchers analyzed data from the NYC HIV Surveillance Registry, looking at information on individuals age 13 or older who were alive at any time between 2001 and 2015. 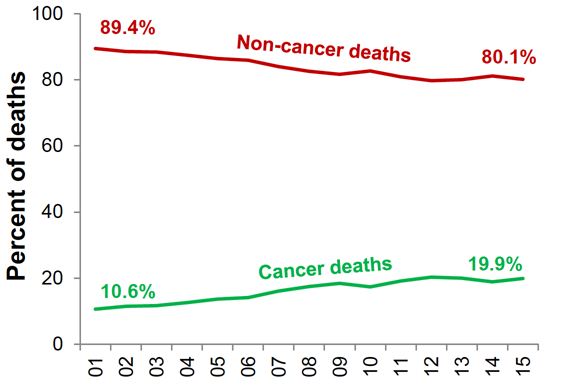 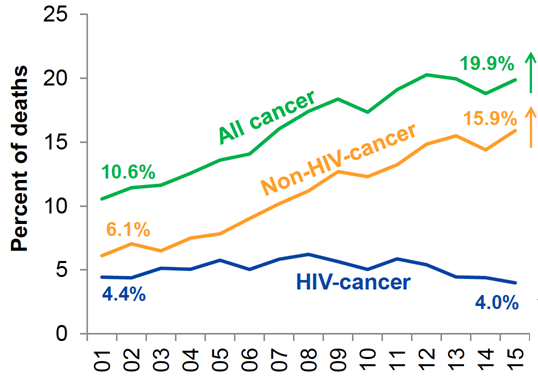 The average age at death among the study population increased steadily between 2001 and 2015, from 46 years old to 56 years old.

The study authors stressed the importance of cancer screening among people with HIV, in particular liver and colon cancer screening for men, and breast and cervical cancer for women. Helping patients to quit smoking is also very important.