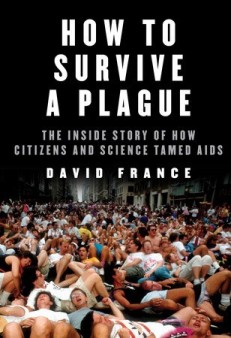 “How to Survive a Plague”—You’ve Seen the Film, Now Read the Book

Released in 2012 and nominated for an Academy Award, David France’s documentary How to Survive a Plague uses original footage to tell the story of how ACT UP and other activists fought for lifesaving treatment in the early years of the epidemic. This week, France’s book version of the film is released by Knopf.

Titled How to Survive a Plague: The Inside Story of How Citizens and Science Tamed AIDS, the printed form offers a deeper, more nuanced look at the same story.

Reviewing the book in The New York Times, activist and journalist Andrew Sullivan, who is living with HIV, writes: “A question has always hung over the reaction of gay men to the Plague that terrorized and decimated them in the 1980s and 1990s: Why did they not surrender? … David France’s remarkable book tries to answer that question. It…somehow manages to pack all the emotional power of [the film version] with far more granular detail and narrative force.”

Sullivan continues: “I doubt any book on this subject will be able to match its access to the men and women who lived and died through the trauma and the personal testimony that, at times, feels so real to someone who witnessed it that I had to put this volume down and catch my breath.”

Want an example of what Sullivan’s talking about? New York Magazine includes an excerpt, timed with the book’s release on November 29 and the opening of the New York City AIDS Memorial on World AIDS Day, December 1.

Titled “Life in the Plague Years,” the excerpt includes a series of first-person snapshots by France, starting with his arrival in New York City in the summer of 1981 for a United Nations internship. The timing coincided with the New York Times’ first published report about what would become the AIDS epidemic.

The diary-like entries, along with personal photos, give the reader an intimate sense of living through the early years of the epidemic. The last entry in the excerpt is “Winter 1991,” a time when the media raged about the war in Iraq, 100,000 Americans had died of AIDS-related illness and France’s lover, beset with painful feet and lungs, struggled to walk up the stairs to their apartment.

To read POZ’s 2012 interview with France about his documentary, click here.