Syphilis Rates Rise 8.8 Percent in One Year Among Gay and Bi Men

The CDC’s first state-by state breakdown of rates of the STI among men who have sex with men reveals a heavy burden in the South.

Syphilis rates are rising among men who have sex with men (MSM), who saw an 8.8 percent uptick in the number of diagnoses between 2013 and 2014 in states that had sufficient data. The burden of the sexually transmitted infection (STI) is particularly high among MSM in the South, according to the Centers for Disease Control and Prevention (CDC).

The actual burden is relatively small: Only about 20,000 people were diagnosed with syphilis in 2014 in the United States, compared with an estimated 800,000 people who contracted gonorrhea. But syphilis’ upward trend, which is driven by MSM, is troubling because of how it may gather steam. (Rates of gonorrhea and chlamydia are also rising.)

“CDC recommends that all sexually active gay and bisexual men—those who reported having sex with a man in the past 12 months—be tested at least annually,” says Cyprian Wejnert, PhD, an epidemiologist at the CDC. “Once diagnosed, syphilis can be treated and cured with complete antibiotic treatment. Untreated, it can lead to visual impairment, affect the brain and nervous system and cause stroke and dementia.”

CDC researchers, including Wejnert, presented findings from two new studies about syphilis testing and diagnosis rates among MSM at the 2016 STD Prevention Conference in Atlanta. The 8.8 percent rate increase finding follows a 2015 CDC report on national STI rates among all risk categories that saw that the overall U.S. population’s number of syphilis diagnoses rose 15 percent between 2013 and 2014. This new analysis includes the first state-by-state breakdown of syphilis rates among MSM.

For the breakdown, CDC researchers relied on preliminary 2015 national case report data and 2014 population estimates of the number of adult MSM in each state. (The CDC relied on such data for its recent estimate of HIV incidence among MSM broken down by states and metropolitan areas. That analysis also found that the South is very hard-hit.)

The syphilis impact is greatest in Southern and Western states. Four out of the five states with the highest rates of syphilis were in the South. For every 100,000 MSM in each state, an estimated 748.3 MSM in North Carolina, 658.9 in Mississippi, 601.8 in Louisiana and 536.9 in South Carolina were diagnosed with syphilis in 2015. (New Mexico was the fifth state.) The national syphilis rate was 309 cases per 100,000 MSM. 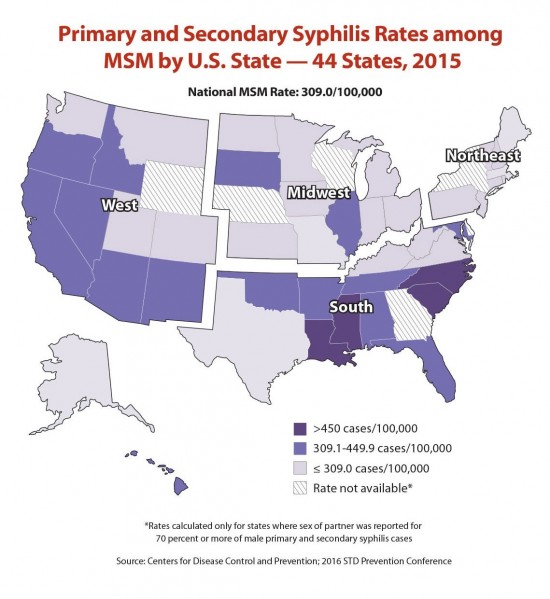 The estimates are notably incomplete, however, because they do not include New York or Georgia. Georgia has the highest syphilis rate among the 50 states, while New York ranks sixth according to the CDC.[1] [2]

On the bright side, syphilis screening rates among MSM are on the rise. In another study, CDC researchers looked at National HIV Behavioral Surveillance data from 2008, 2011 and 2014 to examine patterns in syphilis testing and diagnosis rates among MSM in 20 U.S. cities. In 2014, 49 percent of MSM studied said they had been tested for syphilis during the previous 12 months, a hearty jump from the 37 percent of MSM who reported the same in 2008. The diagnosis rate among those tested rose from 9 percent to 11 percent between 2008 and 2014.

According to Wejnert, CDC officials are not certain if rising syphilis testing rates may have contributed to the increase in syphilis diagnoses.

“We do know that screening more people doesn’t necessarily mean that you’ll see increased percentages or rates of diagnoses; more people tested often means more people testing negative,” Wejnert says, pointing out that syphilis diagnosis rates have been on the rise since 2000.

MSM at highest risk of syphilis were the most likely to be screened in 2014, another encouraging sign, although Wejnert cautions that syphilis testing rates are still too low among MSM. Testing rates were 68 percent among those living with HIV and 65 percent among those reporting more than 10 sexual partners during the previous 12 months. The diagnosis rates among MSM increased the most between 2008 and 2014 among African Americans (from 9 percent to 14 percent), those living with HIV (15 percent to 21 percent) and those reporting 10 or more recent sexual partners (11 percent to 17 percent).

“We know a dangerous intersection exists between syphilis and HIV,” says Wejnert. “Syphilis symptoms make it easier to both acquire and transmit HIV. And CDC surveillance data indicate about half of MSM who have syphilis are coinfected with HIV.”

Editor’s note: A previous version of this article had two key errors. It stated that MSM saw a 15 percent rise in their syphilis rate between 2013 and 2014. In fact, this was the overall rise among all U.S. residents; whereas in states that provided sufficient data, MSM saw an 8.8 percent one-year rise in syphilis diagnoses. The article also stated that 800,000 people were diagnosed with gonorrhea in 2014; that figure represents the estimated number of people who contracted the STI that year.