Carl Sciortino is the executive director of AIDS ACTION Committee in Boston. Before joining AIDS Action in 2014, he served for nine years as a state representative in the Massachusetts legislature, where he advocated for policies such as increasing funding for HIV-related services and expanding HIV treatment in the state. Sciortino holds a bachelor’s degree in biology from Tufts University, and a master’s in public administration from Harvard. He also lives with HIV.

Since its founding in 1983, AIDS Action has become the largest AIDS service organization (ASO) in the New England region, providing short- and long-term support services to those living with HIV, and compassion, care and critical mental health services for people newly diagnosed. AIDS Action also serves populations at risk for HIV and other blood-borne viruses, such as hepatitis C, and operates needle exchanges and offers mental health and addiction recovery services.

In 2013, AIDS Action partnered with Fenway Health, a health care facility that has served Boston’s diverse population for 45 years, and focuses on the lesbian, gay, bisexual and transgender (LGBT) community. The partnership has improved the delivery of care and services to AIDS Action’s and Fenway Health’s clients, and is strengthening the advocacy, prevention and research efforts at both organizations.

What are your priorities for this year?

This year we are launching a Getting to Zero initiative. We’re bringing together AIDS service organizations (ASOs), community health organizations, statewide public health organizations, medical groups, and people that have direct and indirect interest in stopping HIV to write our own blueprint for that goal. That takes time, brainpower and expertise, but we are lucky to have some of the best minds in the field in our own backyard.

Getting to zero is not the same as staying at zero, and until we have a vaccine and a cure, our work doesn’t end. But we do have the opportunity here in Massachusetts to begin to drive this epidemic into the ground in terms of new infections. The infection rates in the states that haven’t expanded Medicaid are an atrocious embarrassment for this country. My goal is to end the epidemic, not just end the epidemic in Massachusetts.

We’ve had success in Massachusetts already; we had a 41 percent decline in new cases from 2002 to 2012, where the statewide number just flatlined at 50,000 per year. That was because we had policies in place like the 2001 Medicaid expansion for people with HIV.

Are there any programs and services that you want to hold up as examples that others could model?

I’m excited about our prevention work. We’re kicking off our pre-exposure prophylaxis (PrEP) public education and outreach work. We’ve done an ad campaign on the MBTA, our subway system here in Boston, as well as online ads on Grindr, Scruff, Jack’d and Manhunt, and we’ve seen this huge spike in traffic on TalkPrEP.org, our informational website for the Boston area. We’ve had a huge number of new people initiating PrEP, and we know that’ll be key to ending the epidemic and getting to zero.

We’re in the first days of this conversation around PrEP as a community, nationally, globally and locally. We’ve had this intervention on the table, approved and covered by most insurance, for a couple of years now, and we’re still finding so many people who are at high risk for HIV who have never heard of PrEP; or if they’ve heard of it, they don’t know how to get it; or if they’ve tried to get it, they’ve run into doctors that either are clueless or shame them for even thinking about it.

Part of our challenge is to give people the space to understand what it is, that it exists, and begin to remove some of the monetary, systemic and cultural barriers to accessing PrEP. That’s the work that we need to do faster.

As someone living with HIV, what do you think about PrEP?

It’s removing a lot of the social and sexual barriers between people who are living with HIV and people who are not living with HIV who are on PrEP. We’ve told people that HIV status apartheid is somehow good for public health, but that’s not been true for the most part: People keep getting HIV because they believe they’re having sex with an HIV-negative person.

I’ve been living with HIV for about six years. It was difficult to get the diagnosis, and I felt lucky to have access to some of the best doctors and care in the world. I remember meeting my HIV specialist; he told me, “Take care of yourself, heal and give yourself time.” That was important to me, to give myself time to think about how to adjust to it. 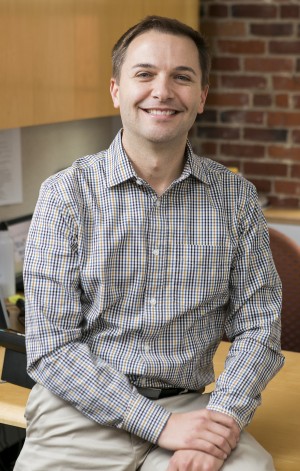 There are very few folks living with HIV in leadership at service organizations. What are your perspectives on that?

I made the transition from being in politics to running AIDS Action Committee a couple of years ago. I’m excited to be public about it and have my story as a person living with HIV be a part of my advocacy. AIDS Action has been around since 1983, and I’m the first person running the organization who’s living with the virus. That was a big deal to a lot of people here, but it wasn’t until getting on the ground, working with staff and with clients, that I could see how important it is to have someone running an organization who has experience living with HIV.

Today it’s much easier for someone living with HIV to be silent about it. As a result, we’ve lost a lot of the activism and the visibility of people in the community who 20 years ago had no choice but to be visible. It’s important to have leaders in our community who live with HIV, to give a face and a voice to the epidemic, and to be leaders in the work of ending the epidemic.

AIDS Action does direct services, but we also do lobbying, advocacy and public education, so I’ve been able to use my political history, and relationships and experiences. I’ve also been able to share my story with a lot of colleagues, so no one at the statehouse can say they don’t know someone with HIV. I try to be thoughtful about using those relationships to build information and access to the legislature for our community as well.

Tell us about your addiction and mental health programs and services.

The heroin crisis and opiate overdoses have begun to get people’s attention. We operate a needle exchange program here, where we’ve had success reducing HIV transmission in the intravenous drug-using community. We’ve had about a 90 percent reduction since those programs went into effect for HIV transmission by needle exposure, which is amazing. But we’re still seeing an explosion of hepatitis C, and we’re seeing an explosion of addiction and needle use and overdoses.

Our staff is working tirelessly to save lives with Narcan (naloxone), which we train users, agencies, family members and friends to use. Our program reversed roughly 165 overdoses last year. We’re trying to change state law to make it easier to establish needle exchanges around the state.

I’ve had too many friends that have gotten HIV specifically because of crystal meth. You might not even notice the meth problem in the gay community if you’re not looking for it, but it’s everywhere, and it’s really devastating.

We have a behavioral health department that provides low-threshold mental health services. If someone walks through the door today because they’re crashing from a meth binge but they’re ready to see someone, we will see them. That easy access to services is critical.

Can people with HIV make a difference?

If we think about what it means for someone’s personal health and life to have access to care, and the public health implication of not treating someone and the costs associated with that, both individually and long-term—it’s an outrage.

People with HIV are in the best position to tell that story and begin to make a difference, even where change seems impossible. It’s not going to change if people don’t speak out and get involved.