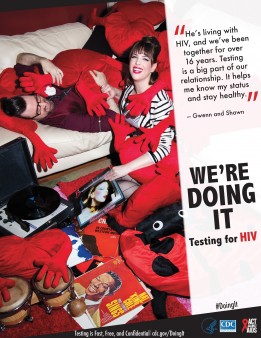 Testing for HIV: Everybody’s ‘Doing It’

To promote HIV testing as a regular part of everyone’s health routine, the U.S. Centers for Disease Control and Prevention’s Act Against AIDS initiative launched a multimedia campaign titled “Doing It.” In line with that goal, the campaign stars a host of everyday Americans of various ethnicities, occupations, genders and sexualities, including POZ blogger Shawn Decker and his wife, Gwenn Barringer.

Plus: The CDC also launched an online risk-assessment tool to help folks decide which HIV prevention method is best for them, including condoms, pre-exposure prophylaxis (PrEP) and, for those living with HIV, treatment as prevention (TasP, which refers to taking daily meds to stay healthier and undetectable). What’s right for you?