A 2010 policy to rapidly treat all those newly diagnosed with HIV has proved highly successful.

A 2010 San Francisco policy to rapidly treat all those diagnosed with HIV has considerably narrowed the time people newly diagnosed with the virus spend with a viral load high enough to pose a significant risk of transmission to others, aidsmap reports.

The city has also been singularly aggressive in promoting the use of pre-exposure prophylaxis (PrEP), with an estimated 20,000 residents (half of those at significant risk of contracting the virus) taking Truvada for HIV prevention.

San Francisco’s annual HIV diagnosis rate generally and slowly declined from 2006 to 2012, from 530 to 453 diagnoses, and has followed a steep decline in the years since, reaching just 223 diagnoses in 2016. 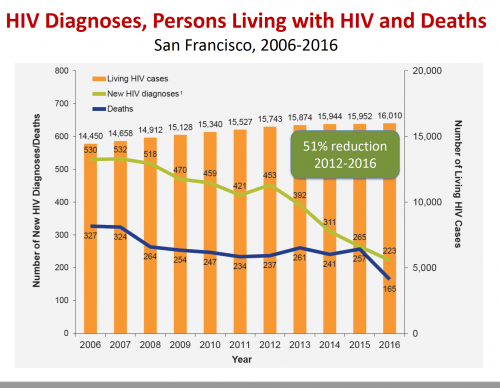 The collective findings of three major studies have led to a global consensus that those people with HIV who maintain a fully suppressed, or undetectable, viral load have effectively no risk of transmission. That said, researchers generally believe that only a viral load of 1,500 or higher poses a significant risk of passing on the virus.

Presenting their findings at the International AIDS Conference in Amsterdam (AIDS 2018), researchers from the San Francisco City Department of Health analyzed data from the city’s HIV surveillance registry regarding all those diagnosed with HIV between 2008 and 2016 who had at least two viral load tests during the first year following their diagnosis.

Fifty-four percent of the cohort began antiretroviral (ARV) treatment within one year of diagnosis, 20 percent started ARVs within three months of diagnosis and 24 percent did not have any record of having started treatment.

Looking at the cohort members’ first year post-diagnosis, the study authors found that in 2008, 46 percent of the cohort spent that time with viral loads above 10,000 and 62.3 percent had viral loads above 1,500. By 2012, those respective figures had declined to 28 percent and 39 percent; and by 2016, the proportions had declined further to just 17 percent and 24.8 percent.

The study authors found that factors associated with spending longer periods with a viral load above 200 included being an MSM who injects drugs, being homeless and starting treatment more than three months after diagnosis. Additionally, 25- to 29-year-olds had a slightly higher risk of spending more time with a detectable viral load.