The inexpensive kit, called Catch, was designed with developing countries in mind.

When industrial product designer Hans Ramzan lost a beloved aunt who was a big supporter of helping people in developing countries, he was inspired to create an inexpensive HIV test that could help those populations get diagnosed quickly and during earlier stages of the disease.

The result, reports Design Week, is a small device called Catch that costs £4 (about $5.20) to produce. Ramzan, who is based in London, said Catch would be ideal for use in developing countries because people can self-test at home, sparing them long journeys to the nearest hospital or caregiver.

His hope is that people can learn their HIV status sooner after infection, which can lead to much better treatment outcomes.

“The main problem,” he tells Design Week, “is that people are reluctant to go to hospitals and see doctors due to numerous factors (such as lack of infrastructure and transport). People don’t want to travel miles to be told ‘it’s too late.’ With Catch, it will give immediate results, and the user can then travel to a doctor to be treated.” 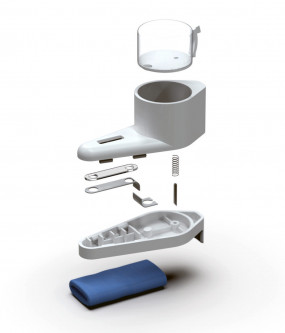 Ramzan is now exploring options for producing and distributing the device. He says he is not looking to make a profit and would consider partnering with a charity. Ideally, Catch would be available to the masses in the next few years.

Correction: An earlier version of this article stated that Ramzan’s aunt died of AIDS-related illness. She did not. But she was a supporter of big issues in developing countries.