Take a Tip From This HIV-Positive Former Smoker 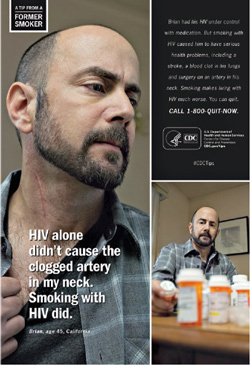 Smoking and HIV don’t mix. Just ask Brian. Feeling invincible after rebounding from AIDS, he kept smoking—only to have clogged blood vessels in his neck lead to a stroke when he was just 43. Today, he’s a new spokesperson for the Centers for Disease Control and Prevention’s “Tips From Former Smokers” multimedia campaign, and he’s urging HIV-positive smokers to give up the habit. That’s because smoking magnifies the health risks already brought on by HIV-related inflammation—including heart disease, cancer and stroke—and it may also make people with the virus more prone to infections such as thrush and pneumocystis pneumonia (PCP). About 42 percent of HIV-positive people smoke, compared with 20 percent of the general population. Need help quitting? Talk with your doctor or call 1-800-QUITNOW.

Good Tobacco?
Not all tobacco news is bad. Researchers at the University of Louisville, Kentucky, are using the plant to cultivate a protein called griffithsin (GRFT) that can bond to HIV and prevent it from infecting cells. The hope is it could be taken from the tobacco and then used as a microbicide. To be clear: Tobacco itself does not fight HIV, as Brian knows all too well.