Today’s HIV Meds Are Not Linked to High Blood Pressure

A large, ongoing study of people with HIV found that only a couple of older antiretrovirals were linked to high blood pressure.

The antiretrovirals (ARVs) in common usage today are not associated with an increased risk of high blood pressure, aidsmap reports.

Publishing their findings in HIV Medicine, researchers from the D:A:D study, a large, ongoing multi-cohort observational study of people with HIV, updated their 2005 paper in which they were unable to identify a clear link between ARVs and high blood pressure.

For this new analysis, the researchers analyzed data on 33,278 HIV-positive study participants who were in medical care for the virus in Europe, Australia and the United States between 1999 and 2013. They looked for a relationship between hypertension diagnoses and 18 ARVs as well as various other risk factors.

Three out of four of the participants were male, and 44 percent of the participants overall were men who likely contracted the virus through sex with another man. The median age upon entry into the study was 38 years old. About half of the study members were white and one in five had received an AIDS diagnosis. The median CD4 count was 429. Almost 40 percent had a fully suppressed viral load and 68 percent had received ARVs.

As for cardiovascular risk factors, 60 percent had a history of smoking, 16 percent had a body mass index (BMI) over 26 (between 25 and 29.5 indicates overweight), 18 percent had lipodystrophy (the irregular distribution of body fat associated with some of the earliest ARVs) 4 percent were on medication to lower their blood lipids and 2 percent had diabetes.

When the researchers analyzed the data without adjusting for any non-ARV factors associated with high blood pressure, they found that all the HIV medications were linked to the condition except for Norvir (ritonavir)-boosted Prezista (darunavir) and Emtriva (emtricitabine).

Then the study authors adjusted for demographic risk factors for high blood pressure and found that the only ARVs still linked to the condition were Ziagen (abacavir), Viramune (nevirapine), Norvir and Norvir-boosted Crixivan (indinavir).

The most prominent risk factors for high blood pressure included being male, being older, being Black, engaging in injection drug use and having an AIDS diagnosis, diabetes, high blood lipids, lipodystrophy, obesity and impaired kidney function. 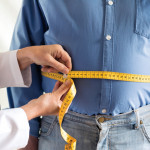 What are the consequences of overweight and obesity?