Rolling Stone spoke with Bell, who is living with HIV, about his current stage and musical persona and Erasure’s ’80s hits “Chains of Love” and “Little Respect.” In the saga’s newest iteration, Torsten, a state-sponsored entertainer, lives in a near-future dystopia and looks back on his life through song.

“This ruminates on the current state of things and takes it a step beyond,” Bell tells Rolling Stone. “Where are we in all of that? Politically, we seem to be gearing much more towards the dictatorship scenarios or non-freedom of the press. It seems like they’re clamping down in many places. It’s a weird time. It’s lovely to be part of because it’s not preachy. It’s quite swear-y and rude, but it’s not in-your-face preaching. It’s very comedic and quite gross—but with beautiful songs.”

The new show’s soundtrack is titled Torsten in Queereteria. 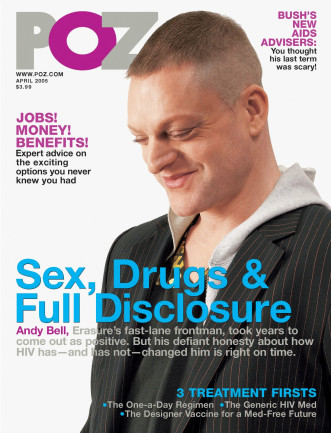 Andy Bell on the POZ cover for April 2005

Read the POZ cover story with Bell here. Throughout 2019, POZ is celebrating its 25th anniversary. For a look back at all our issues, click #POZ at 25.