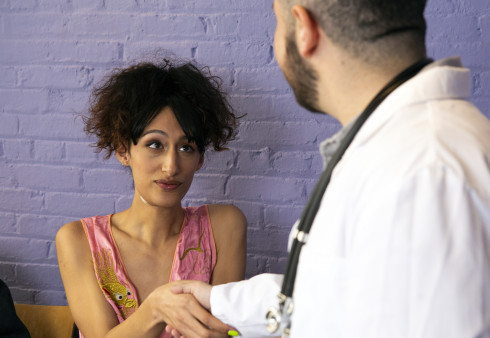 Trade-Off for Trans Women Between Hormones and Heart Risk

We already know that women living with HIV are at higher risk for heart disease. Now, new data presented at the Conference on Retroviruses and Opportunistic Infections (CROI 2022) suggests the same is true for transgender women who are using feminizing hormones. Researchers noted biomarker changes suggesting that trans women on hormones may be more prone to heart problems, but they didn’t follow the women long enough to see whether these changes resulted in an actual increase in cardiac events, such as heart attacks.

Jordan Lake, MD, of the University of Texas Health Sciences Center in Houston, and colleagues recruited 32 women of transgender experience who had been on feminizing hormones for at least three months to see how their cardiovascular health compared with that of 60 cisgender men matched for age and race/ethnicity. Hormone therapy can contribute to coagulation, metabolic changes and inflammation, which can alter cardiovascular risk, the researchers noted as background.

The trans women had a median age of 52 years, 53% were Black and 22% were Latina. A majority of the trans women (78%) and cisgender men (73%) were living with HIV, and they were all on antiretroviral treatment with an undetectable viral load and high CD4 counts. All but one of the HIV-positive trans women, but only a third of the men, were taking integrase inhibitors. Two out of three women (66%) were taking androgen blockers, and 91% were taking some form of estrogen; 8% of the cisgender men were taking testosterone. People with a history of prior cardiovascular procedures were excluded.

The researchers found that the trans women were, well, women according to hormonal markers: They had lower testosterone and more than three times the level of estradiol compared with their male counterparts. A third of the trans women, but none of the men, had total testosterone levels below 50 nanograms per milliliter.

Cardiovascular risk factors, including hypertension and smoking, were common in both groups. Looking at metabolic biomarkers, the men’s fasting glucose was slightly higher than the women’s, and more of the men had hyperlipidemia (75% versus 47%). The women had higher levels of adiponectin (a hormone produced by fat cells), endothelin (a peptide that constricts blood vessels and regulates blood pressure) and EN-RAGE (an inflammatory biomarker linked to cardiovascular disease). However, both groups had similar levels of various other biomarkers linked to inflammation and coagulation.

Turning to body composition as measured by CT scans, the women had more than double the thigh muscle fat as men, but they had less fat within the chest cavity and surrounding the aorta. Both groups had similar amounts of subcutaneous and visceral abdominal fat, fat around the heart and measures of liver fat accumulation.

Perhaps more important, when the researchers looked at cardiovascular biomarkers according to hormone levels, they found that higher estradiol was linked to more thigh muscle fat, while lower total testosterone was associated with more thigh muscle fat and abdominal fat. What’s more, higher estradiol was associated with higher levels of adiponectin and EN-RAGE.

“In this group of older transgender women on feminizing hormone therapy, higher estradiol and lower total testosterone concentrations were associated with worse body composition and mixed effects on select cardiometabolic biomarkers,” Lake and colleagues concluded. “Specifically, greater visceral fat and fatty muscle infiltration and higher endothelin-1 and EN-RAGE concentrations have been associated with increased cardiovascular risk in the general population, though higher adiponectin is generally thought to be beneficial. More nuanced understanding of the relationships between feminizing hormone therapy and cardiometabolic risk in transgender women is needed.”

Click here to read more news about HIV treatment and prevention for transgender people and to learn about how gender-affirmative care is associated with better HIV outcomes.