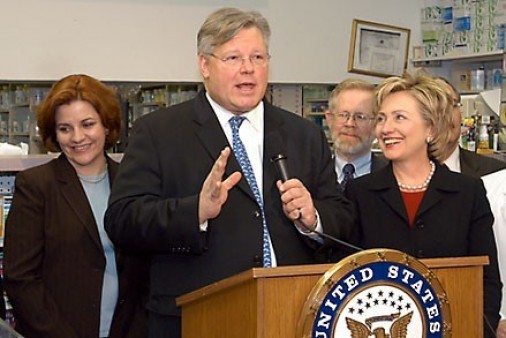 The outspoken former New York state senator sounds off about the presidential race and his battles to support the best of HIV legislation and thwart the worst.

A true New Yorker and an ACT UP veteran, Tom Duane isn’t one to mince words. He got straight to the point during his ultimately successful run for the New York City Council in 1991, coming out as HIV-positive in a letter to voters at the height of the AIDS crisis. The Democrat went on to land a seat in the New York State Senate in 1998, making him the first openly HIV-positive and the second openly gay individual to join the state legislature.

During his time in New York’s capital, Albany, Duane marshaled through the Sexual Orientation Non-Discrimination Act, or SONDA, which barred discrimination based on sexual orientation in New York in 2002. He also played a key role in passing a hate crimes act in 2000 and was a lead sponsor of the legislation that legalized same-sex marriage in the Empire State in 2011.

His speeches on the Senate floor were as famous for their passion as their verbosity.

Since retiring from the Senate in 2012, Duane, 61, has kept on talking, teaching civics at Baruch College in New York City and maintaining a schedule of speaking engagements. He took the time to speak to POZ about his career and the current political climate with regard to HIV.

What was it like being out about your HIV status as an elected official?

When I first went to Albany, there was one senator who didn’t want to shake my hand.

I think in a way, my colleagues quickly forgot that I had HIV and [it] kind of became a non-issue. But because they kind of forgot, they [would support] stigmatizing policies, and I would have to remind them again.

At one point, I wanted to stop a bad [HIV] testing bill. I passed out a letter to all members of the assembly telling them that I was living with HIV. This gave me standing on educating them [about] what the best policies could be around HIV and AIDS.

Speak about your efforts surrounding such policies.

I stopped all the horrible stigmatizing, criminalizing bills from the time I got there. The predominant one was HIV presumption laws. That means if someone had to go on disability because they had AIDS, it was presumed that they contracted [HIV] on the job.

Additionally, I got a law passed that mandated the offering to everyone to have HIV test.

I also wanted to tell people that they are protected against discrimination should they test positive and make sure that people are immediately provided with health care. I think that is a good model, and variations of that law have been passed around the nation.

How do you feel about HIV’s current place in the political arena?

There is still some stigma and discrimination on HIV and AIDS. Is it diminished? Somewhat, yes, but is it still predominant somewhere in the other states or around the nation? Yes. I think we see that through the continued criminalization of people with HIV.

The other thing is that the funding is still not how it should be for research on HIV.

What are your impressions of the official Republican Party platform with regard to HIV?

There is no call for additional steps in [HIV] research; they just mentioned several other diseases like breast cancer and prostate cancer.

While the Democrats are not 100 percent wonderful in the issues of HIV, they are still better. And even the Republicans who should know better don’t always speak up.

[The Republicans] are horrendous and just beyond backward around family life and what constitutes marriage and also around the rights of people of transgender experience.

In your mind, how do the two major candidates for president measure up on HIV issues?

I don’t think either candidate is talking enough about HIV and AIDS domestically or internationally.

That said, certainly Hillary Clinton, as the senator from New York and also [in] her role as secretary of state—and because of her commitment to health care reform and access—has been a far greater [leader] on behalf of people with AIDS and people at risk of contracting HIV.

I am not aware of Donald Trump saying or doing anything about HIV.

In fact, he hasn’t said anything about the epidemic during the campaign and has no HIV-specific policy proposals.

There doesn’t seem to be any record of [Trump] giving any personal money to HIV—compared to the Clinton Foundation, which actually has done a tremendous amount of work globally on HIV and AIDS.

I never knew [Trump] to be particularly homophobic, but certainly the company he keeps…

…Such as his running mate, Indiana Governor Mike Pence.

[Pence’s] intrusiveness and penchant for supporting criminalization and stigmatization of HIV and AIDS [and his] ignoring the scientific evidence of the failure of abstinence education as a tool in fighting HIV and AIDS—horrible, absolutely horrible, dreadful.