The lead organizer of the first National Trans Visibility March on DC urges action by HIV advocates in 2020. 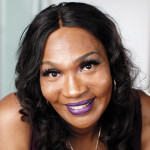 Marissa Miller was the lead organizer of the first National Trans Visibility March on DC, which took place Saturday, September 28, in the nation’s capital. Thousands attended the march down Pennsylvania Avenue, which was preceded by a rally at Freedom Plaza. Miller is also a 2019 POZ 100 honoree (click here).

Miller is currently the CEO of Transsolutions Consulting, a global resource center that advocates for safety and universal health access for transgender, gender-nonconforming and nonbinary people across the country. For more than a decade, she has worked in public health with a focus on HIV.

As a Black transgender woman living with HIV, Miller has both personal and professional experience with the virus. She has worked with such groups as Howard Brown Health, AIDS United, Positively Trans and the Transgender Law Center.

Most recently, Miller was a program coordinator in the leadership division of the National Minority AIDS Council. She stepped away from that role just before the 2019 march to focus on planning the 2020 march.

How did the idea for the trans march originate?

In 2018, the Positive Women’s Network–USA had its third National Leadership Summit in Myrtle Beach, South Carolina. There was tension between some cisgender women and some trans women. It got rowdy, and it kind of scared me because I’d never been in a setting where people who were fighting for the same cause were so able to let words separate us.

As a result, Lynn Morrison, a trans advocate from Atlanta, suggested during the summit that we needed a trans march. About six months after that, Dejanay Stanton, a trans woman from Chicago, was killed. She died three days before she was supposed to start a class that me and my business partner, Tatyana Moaton, who has a consulting business in Chicago, were conducting. We were going to mentor 10 Black trans women from the sex industry.

Out of emotion—very disappointed at the system and at myself for not getting to Dejanay a little bit sooner—I posted on Facebook that we should have a trans march in 2019. The idea caught fire with tons of likes and shares.

The Trump administration has made it abundantly clear that trans, gender-nonconforming and nonbinary people are not included in their narrative of who we are as a country.

They’ve made it difficult for trans people to access medical care. They’ve begun making it possible for folks to tell us that we can’t have jobs or access businesses and other services because we’re not really protected under the law.

Tell us about the rally and the march.

We originally wanted the march to take place on National Trans Visibility Day, which is March 31. As a result of underestimating the costs—as well as having the original date coincide with April Fool’s Day—we delayed. In the end, postponing the march helped us raise additional funds and bring in support to make it the best event that we could.

People from across the country attended both the rally and the march. Our opening reception was hosted the night before in DC by the National LGBT Chamber of Commerce, where we honored 16 advocates at our Torch Awards.

One of the people we honored was actress and activist Angelica Ross [from Pose on FX] for the work that she’s done as founder and CEO of TransTech Social Enterprises over the past decade, including sponsoring our virtual march. She wanted the trans march to reach everybody, so the virtual march made that possible.

The day before the march, we held workshops for march participants at our official hotel. Subjects ranged from financial equity and social media to health and wellness. They were designed to support participants in their advocacy.

The rally motivated the participants to get energized for taking our call to action to the streets. In addition to several musical performances, Angelica Ross and Lynn Morrison were among the many amazing speakers.

The march itself saw thousands of participants walk down Pennsylvania Avenue, right past the Trump Hotel, all the way up to the Capitol Building.

Both at the rally and at the end of the march, you urged participants to get involved with the 2020 march. Why?

The 2019 march was a great start for our trans advocacy, but since 2020 is a crucial election year, the next march will be even more important.

Our community partners—such as Rock the Vote, Human Rights Campaign and GLAAD—as well as our trans march ambassadors nationwide will be spreading the word about the importance of voting in 2020.

Get out the vote efforts will be happening from now through 2020, up to and including election day.

The details of the next march haven’t been finalized, but we are confident it will take place in September 2020.

In addition to the next march, please tell us about your other efforts.

I left NMAC to focus on the next march, but I am working on more projects. There is just so much work to do when it comes to trans advocacy in general.

One of those projects is working as a consultant to TransTech Social Enterprises. I’ll be assisting Angelica Ross to build their conference.

I’m also working with TransTech to develop a safety device. For transgender, gender-nonconforming and nonbinary people, the issue of safety is a primary concern. We’re going to pilot the device in 10 major U.S. cities.

We talk about HIV prevention and adherence to treatment for the virus. We know that equity and opportunity are part of the formula for ending the HIV epidemic by 2030. However, if we’re not safe, or don’t feel safe, all the other discussions become secondary.

The device is not an app on a smart phone. It is a separate device that can be carried or worn discreetly. When activated, which will be as simple as pressing a button, someone the device owner preprogrammed into it will be notified that their friend needs assistance.

One of the things that we realized from having conversations about the device is that we didn’t want it to police the people who were using it. So that is why we envision it as a buddy plan.

All the hate crimes and murders affecting not only the trans community but also the LGBT community at large have made prioritizing safety a must.

You tested HIV positive in 1990. As a long-term survivor, please share your insights on living with the virus.

After I tested positive in the prison system, I just laid in my cell. At that time, I didn’t have a whole lot of information about HIV, and I certainly didn’t think that I would be celebrating my 50th birthday in 2020. I thought that I would be dead before I was 30.

Their encouragement led to my being put in positions of decision-making at the table. In turn, that allowed me to have broader conversations about transgender people and HIV.

From my perspective, leadership was never about others following me. Leadership was always about me taking people on a journey with me.

My advice to folks living with HIV is to keep living. Stay at the table—and if there is no table, create a table.