Focusing On the Needs of Transgender People 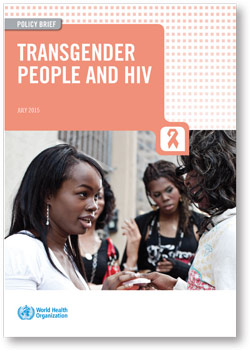 Not to state the obvious, but the HIV-related needs of transgender people are not exactly the same as those of gay men or other men who have sex with men. Duh. But many health-related policies and studies do not separate the two populations. Thankfully, that’s changing. Last year, the World Health Organization (WHO) acknowledged that the “high vulnerability and specific health needs of transgender people necessitates a distinct and independent status in the global HIV response.”

The WHO followed up by recently releasing a 34-page policy brief titled Transgender People and HIV. More than just a summary of recommendations for HIV prevention, diagnosis, treatment and care among trans people, the brief also covers related topics such as hormonal treatment, stigma, mental health, violence and community empowerment.

“In general, health data are less robust for transgender people than for the general population due to challenges in sampling, lack of population size estimates and issues of stigma and discrimination,” reads the policy brief before adding that only 39 percent of national AIDS policies address trans issues.

Meanwhile, Positively Trans (T+)—an offshoot of the Transgender Law Center—just finished an online survey of transgender people living with HIV in the United States. The resulting data will help set priorities and advocacy, so we can’t wait to learn what they discover.