In light of the many HIV treatment advances, are we forgetting to set our sights on a cure?

In May, longtime National Institutes of Health AIDS czar Anthony Fauci, MD, published exciting  findings: Seven of his patients who had started HAART very early after infection managed to quickly reduce the amount of HIV hiding away in their latent cells. Such hidden HIV, usually beyond the reach of HIV meds, has long thwarted the hope of banishing HIV completely. So when Fauci said such a feat might still be possible for patients who started treatment right after infection and stayed on it for about eight years, he revived whispers of the C-word: cure.

Yet at the International AIDS Society conference in Sydney this past July, a reporter pressed Fauci on the notion of a cure—and he snapped, “Let’s just stop talking about it.” Fauci later said he was “talking about Africa particularly, [where] only 28 percent of the people who need therapy are receiving it.” Sure, he says, let’s pursue a cure—but let’s also keep basic treatment access a top priority.

Point taken. But Fauci’s wariness isn’t unique. Most HIV doctors and activists, not to mention people with HIV/AIDS, avoid the word cure like, well, the plague. Yet the search for it is alive and well. While labs like Fauci’s and New York’s Aaron Diamond AIDS Research Center aim for total eradication, others explore alternate paths. City of Hope, a California research center, plans studies in which positive people will be injected with genes tweaked to resist HIV. In Seattle, the drugmaker Koronis has enrolled 32 never-treated positive people in a study of a med that aims to speed HIV replication—into extinction. Meanwhile, The Foundation for AIDS Research (amfAR) has given more than $2 million to labs pursuing a cure, including efforts to defang the notorious Vif, the HIV protein that blocks human cells from killing the virus.

“Two or three years ago, none of this stuff was going on,” says longtime treatment activist Martin Delaney of Project Inform. Like many other experts, he disagrees with critics who say that drugmakers fear a cure because it would cut into their HIV profits. Instead, he says, whoever does find a cure will profit big-time.

So why do we recoil from the C-word? Partly because we’ve been let down before. “Over 26 years, we’ve gone down the path of the silver-bullet distraction,” says HIV-positive Phill Wilson, founder of the Black AIDS Institute. “We’re desperately trying to engage folks in a conversation about ending the AIDS epidemic in black communities,” he says—and that’s best done, he insists, by expanding proven prevention and treatment.

Then there’s our social conscience—and our guilt. “I consider my treatment a cure, because it has brought me so far from [being] seriously ill,” says POZ founder Sean Strub. “But until everyone is cured, none of us is. That sounds hackneyed, but it’s true.”

For other longtimers, the reasons are deeply personal. Patricia Nalls, diagnosed in 1987 and founder of The Women’s Collective, an HIV support center in DC, says she can’t imagine herself without HIV. “How do you forget about all that’s happened and move on as though it never did?” she asks. New York City’s Christopher Murray, positive for nearly 20 years, adds, “I wouldn’t know what to do emotionally if a cure came down the pike. I’m so used to having my HIV status as this convenient bookmark.”

It’s as though HIV has integrated itself into our identities as well as our DNA. It can be hard to think like Deneen Robinson, a Dallas treatment educator diagnosed in 1992, who says, “I see myself as a diamond with many facets, and HIV is simply one of them.”

A cure may be long in coming, but as long as researchers pursue it, let’s permit ourselves to talk about it, dream about it, imagine it. We may not vanquish HIV tomorrow, but we can transcend it—if only for a little while—every day. 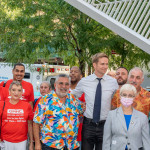