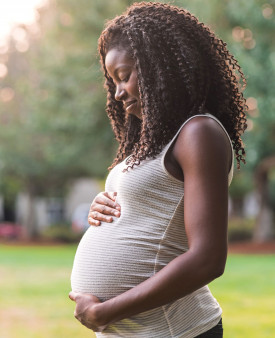 For pregnant women with HIV, dolutegravir-based regimens are apparently safest.

Dolutegravir-based regimens may be the safest HIV treatment option for pregnant women. In 2018, a study in Botswana raised concerns that exposure to dolutegravir (Tivicay, also in the Triumeq, Juluca and Dovato combination pills) during early gestation might increase the risk of neural tube birth defects. Later research, however, showed that the occurrence of birth defects is similar to the rate seen in the general population. Now, researchers have shown that pregnant women treated with dolutegravir plus either Truvada (tenofovir disoproxil fumarate/emtricitabine) or Descovy (tenofovir alafenamide/emtricitabine) are more likely to have an undetectable viral load at the time of delivery than those who use Atripla (efavirenz/tenofovir disoproxil fumarate/emtricitabine)— 98% versus 91%, respectively. What’s more, 24% of the women who used dolutegravir plus Descovy and 33% of those who used either dolutegravir plus Truvada or Atripla had adverse pregnancy outcomes. No cases of neural tube defects were observed.