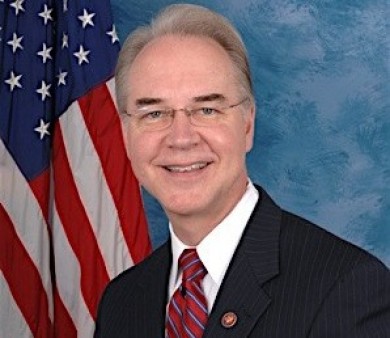 If the Senate confirms Price to head HHS, he will oversee the ACA as well as Medicaid, Medicare and the The Children’s Health Insurance Program. He would also hold sway over the Centers for Disease Control and Prevention, the National Institutes of Health and the Food and Drug Administration.

Price, an orthopedic surgeon, is a conservative who opposes the right to abortion; in fact, he voted for a bill that would have granted the “unborn” equal protection under the 14th Amendment. According to NPR, he has also supported a constitutional amendment defining marriage as between one man and one woman, and he is against legislation that prohibits discrimination based on sexual orientation.

As Vox reports, Trump’s pick of Price signals that his administration is very serious about abolishing the ACA. Price authored the Empowering Patients First Act, which is a detailed proposal to repeal and replace Obamacare.

Price’s plan, according to Vox, benefits the young, healthy and rich while disadvantaging the poor, sick and elderly. It also includes a full repeal of Medicaid expansion, which covers millions of low-income people.

His plan doesn’t ban discrimination against people with preexisting conditions; instead, it allows insurers to charge sick people more money if they don’t maintain “continuous coverage.” Vox describes it this way:

If a cancer patient goes straight from insurance at work to her own policy, her insurer has to charge her a standard rate — it can’t take the cost of her condition into account.

But if she had a lapse in coverage — perhaps she couldn’t afford a new plan between jobs — and went to the individual market under Empowering Patients, insurers could charge her up to 150 percent of the standard premium for her first two years of coverage (you can read this section on page 151 of the bill).

A patient can once again qualify for the standard rate if she maintains 18 months of continuous coverage — although that would likely be with premiums set at the higher rate.

Empowering Patients does have a safety net for people like this: It would invest $3 billion over three years in a high-risk pool to cover those with preexisting conditions who are unable to afford coverage on the marketplace.