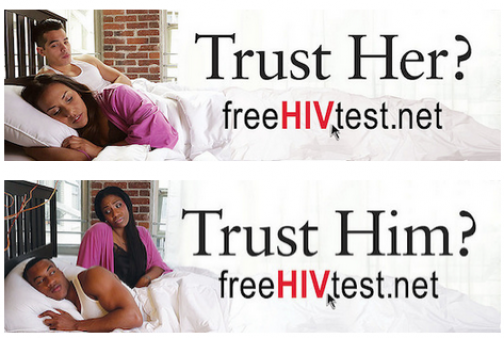 AHF’s ’Trust Him?’ Billboards Aim to Address Infidelity and HIV

A billboard public awareness campaign by AIDS Healthcare Foundation (AHF) hopes to encourage HIV testing, as well as honesty and transparency in sexual relationships, by depicting couples in bed and raising the question “Trust Him?” or “Trust Her?”

According to an AHF press release, the campaign launched this spring in Los Angeles and is slated to appear in Oakland, California; Washington, DC; Columbus, Ohio; and Broward County, Florida.

“In today’s tabloid culture when it can seem that the game called ‘Life’ should be more appropriately tiled ‘Lies,’ the old adage holds true now more than ever, ‘It’s better to be safe than sorry.’” said AHF president Michael Weinstein in the press release. “While infidelity is nothing new, the level of risk in contracting STDS from bed-hopping partners is at an all-time high. We want to remind couples that STDs linger around much longer than a wandering eye and that secret sexual experiences can often produce much more than what one bargained for.”

The billboards depict both gay and straight couples, a reference to data showing that most women contract HIV through heterosexual contact. The campaign also includes various races and ethnicities.

Not everyone in the HIV community is happy with the billboards, which they claim encourage stigma and fear. For more details—and to view humorous reinterpretations of the campaign—click here.