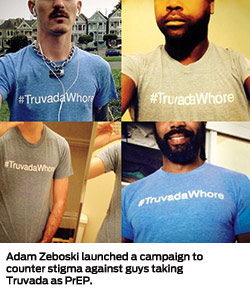 Back in the day, LGBT activists reclaimed the word queer. And now Adam Zeboski is doing the same with “#TruvadaWhore,” a social media campaign and clothing line. The term refers to HIV-negative gay men who take the daily med Truvada as pre-exposure prophylaxis (PrEP), which can lower their risk of acquiring HIV by more than 90 percent. Zeboski, who is an HIV test counselor at the San Francisco AIDS Foundation, first started Truvada as PrEP in the fall of 2012; he took a break but is now on a regimen again. He tolerates the meds just fine—but not the stigma that can come with it. “There is a lot of slut-shaming going on in this community,” Zeboski says. “I have heard the term ‘Truvada whore’ used as a pejorative, and many other PrEPsters I know have experienced it. #TruvadaWhore is about reappropriating the term.”

It’s also about educating the public. The phrase is an active hashtag that can be looked up on various social media. From these platforms, including Zeboski’s blog, anyone can access information about PrEP. “The response has been overwhelmingly positive,” says Zeboski, a.k.a. pup bones, though he adds “there were the expected slut-shamers and conspiracy theorists.” (The campaign, Zeboski points out, is a personal project that’s not affiliated with his job or Gilead, the maker of Truvada.) A few other facts he wants to stress: “I know this will come up, so let me just say, Truvada PrEP does not necessitate that one discontinues the use of condoms. And Truvada PrEP has not been shown to increase behavioral risk factors for HIV.” But try squeezing all that on a T-shirt.