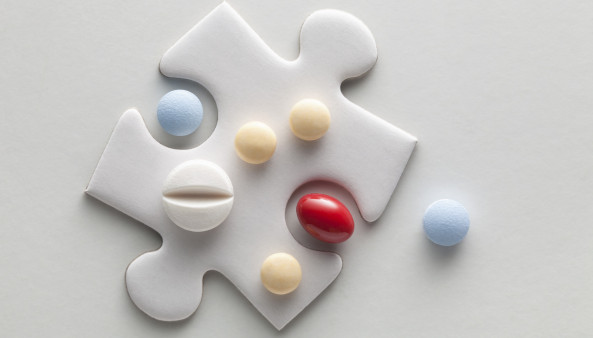 Many participants on two-drug regimens had more treatment under their belt and more chronic conditions.

According to an analysis published in PLoS One, two-drug antiretroviral (ARV) regimens couldn’t stand up to three-drug regimens in heavily pretreated long-term survivors with multiple chronic conditions.

Numerous studies have found that two-drug regimens, such as Juluca (dolutegravir/rilpivirine) and Dovato (dolutegravir/lamivudine), are noninferior to, or work at least as well as, standard three-drug regimens. But that was in clinical trials that often included the people most likely to be successful on two drugs: those for whom antiretroviral drugs or classes never stopped working, those with no previous resistance to any of the major drug classes and those with durably undetectable viral loads. That was the case in the major studies of Juluca and Dovato.

So Ramón Teira, of Hospital de Sierrallana in Spain, and colleagues decided to see how people with multiple chronic conditions and with all viral load levels did on two-drug regimens in the real world.

The researchers looked at a cohort of people living with HIV who received care at 23 sites around Spain, pulling data on 7,481 people who started or switched to a two-drug or three-drug regimen between January 2012 and June 2017. The three-drug regimens contained an integrase inhibitor plus two nucleoside/nucleotide reverse transcriptase inhibitors (NRTIs), either tenofovir disoproxil fumarate (TDF) or tenofovir alafenamide (TAF) and emtricitabine or abacavir/lamivudine—for example, Stribild, Genvoya or Triumeq. The two-drug regimens contained dolutegravir or a boosted protease inhibitor plus one other drug—for example, Dovato, Juluca, boosted Prezista (darunavir) or Kaletra (lopinavir/ritonavir) plus lamivudine, Prezista or Kaletra plus Isentress (raltegravir), or Prezista plus Tivicay (dolutegravir).

Participants on triple therapy had a median age of 47 years, and three out of four of them were men; there was no mention of transgender participation. The cohort was a third  gay or bisexual men (35%), a third people who inject drugs (34%) and nearly a third heterosexuals (29%). One quarter had previously been diagnosed with AIDS, and participants had been living with HIV for a median of 12 years. Those taking a two-drug regimen were significantly older (a median of 50 years old), had been living with HIV for 15 years and were more likely to be women.

Even after adjusting the odds of virologic failure for the differences between the groups, people taking a two-drug combo were still 29% more likely to discontinue their regimen for any reason. When the researchers narrowed it down to switches due to lack of effectiveness, people on a two-drug regimen were twice as likely to switch.