One woman—and her rescue dog, Jackson—bikes across the country to fight AIDS.

Throughout the epidemic, AIDS bike rides have served to raise money and build community. Last year, Uli Schackmann took the concept to another level by making a months-long solo trip from Alaska to Florida to raise funds for amfAR, The Foundation for AIDS Research. Originally from Germany and now living in Fort Lauderdale, Schackmann tells POZ about her journey.

What was your route, and what did you take with you?

I started in Alaska, went through Canada, Minnesota, Wisconsin, Michigan, Ohio, West Virginia, Virginia, North Carolina, South Carolina, Georgia and Florida. I stayed at campsites, hotels and strangers’ homes. I pulled a little trailer for Jackson—a 20-pound Havanese rescue dog—which also had a tent, sleeping bag, my gear, toiletries. And on my bike was welded a post so I could carry a 3-by-5-foot AIDS flag. 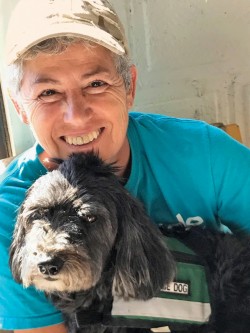 How did you become involved in AIDS causes?

About 20 years ago, I volunteered for an AIDS ride; HIV was very stigmatized then. I got to know so many of the guys affected by it and to see the intimate nature of HIV. I was like, “Holy shit.” I had no idea. Then I switched over to riding.

What reactions did you get on your solo trip?

It’s not like people were waving flags and saying, “Yay, here she comes!” HIV is still a taboo. Plus, I’m a lesbian and had a mastectomy, so no breasts. So I was concerned, especially in today’s political climate. But people asked questions, and I’d share numbers—that 700,000 people have died of AIDS in the United States. People were astounded that we still have AIDS. I [met many] Trump supporters. We didn’t talk politics, but I got support and generosity from everyone—left, right, middle. It was amazing.

What are some of your best memories of the trip?

Definitely Jasper [National Park] and the Rocky Mountains. We had a foot of snow, and people said, “You can’t ride, so stay with us for free.” After a few days, I knew everybody. I walked around town and felt like the mayor. Another time, I had a bear experience. Very scary. A grizzly and two pups. Luckily, the wind was blowing toward me, and Jackson was quiet as a mouse. In Grand Rapids, Michigan, a couple took me in—it was my birthday—and they had a cake with a little banner, and they took me to a lakeside restaurant. While I was at a campsite in Hollywood, South Carolina, [Hurricane Harvey] came in. A friend of a friend in Alabama said I could stay with them, so I rented an SUV and loaded up. We had like 23 people there, five dogs, a cat and I don’t know how many kids. 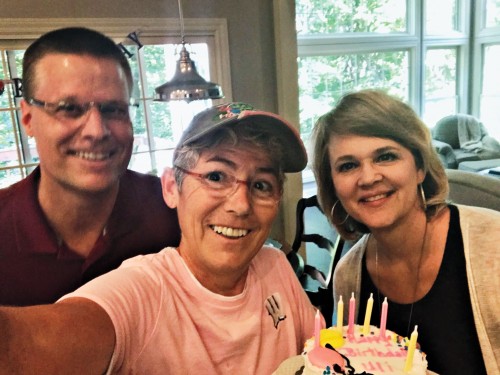 You finished your trek by joining the annual SMART Ride (Southernmost AIDS/HIV Ride) from Miami to Key West. What’s next?

The journey goes on! I’m leaving for Alaska to write a book about my journey and to reconnect with some of the angels who helped me on the road.

Donate to Schackmann’s campaign at CrowdRise.org, and follow her Facebook page, “Uli’s Journey to Find a Cure for AIDS.”

Click here for more info on AIDS bike rides in 2018.