For the first time, more than half of people with HIV are taking meds. The analysis also shows troubling trends in the former Soviet region.

The massive worldwide push to diagnose and successfully treat people with HIV is showing signs of steady progress as the power of antiretrovirals (ARVs) not only to save lives but also to prevent transmission of the virus continues to bear fruit. In advance of the 9th International AIDS Society Conference on HIV Science in Paris (IAS 2017), the Joint United Nations Programme on HIV/AIDS (UNAIDS), released its latest progress report on the global pandemic.

The UNAIDS report was introduced at a press conference at the storied Hôtel de Ville in Paris and included remarks from the city’s mayor, Anne Hidalgo, and UNAIDS executive director Michel Sidibé. 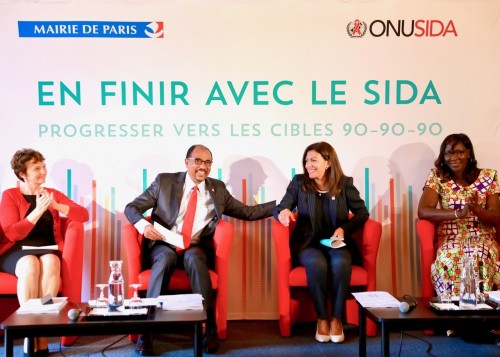 The agency estimates that out of an estimated 36.7 million people living with HIV across the globe in 2016, 19.5 million, or a bit more than half, were on ARV treatment. UNAIDS professes to be on target to get 30 million on treatment by 2030. About 44 percent of the global HIV population is believed to have a fully suppressed viral load.

All told, an estimated 76.1 million people have contracted HIV since the epidemic began in the early1980s. (HIV is believed to have crossed over from primates about a century ago and followed a slow path across the globe before AIDS was first officially identified in the United States in 1981.) The estimated annual rate of new infections has fallen 11 percent since 2010, from 1.9 million to 1.7 million. And estimated annual AIDS-related deaths have declined 48 percent since peaking in 2005, to 1 million last year. 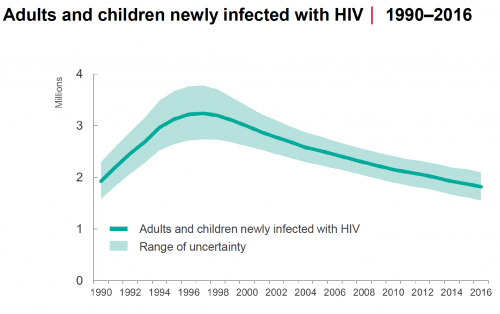 Globally, the rate of new HIV cases peaked in the mid- to late-1990s and has declined steadily in the years since.UNAIDS 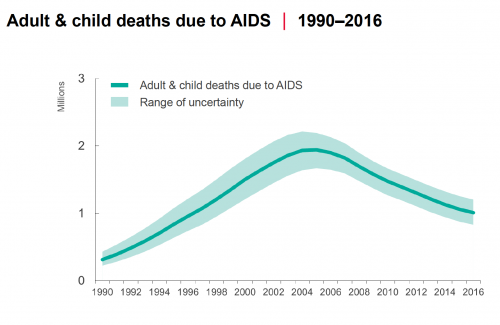 Globally, the annual rate of AIDS-related deaths peaked in 2005.UNAIDS

“This clearly shows that our program is indeed working,” said Sidibé. “This is extraordinary.”

“Of course, we still need to do more, and this is highlighted in this report,” noted Mayor Hidalgo. “In 2020, we need to continue to strive for an end to the epidemic. It is really a question of political will.”

Indeed, the progress made thus far remains tenuous in the face of threats of global funding cutbacks, most notably from the primary contributor to efforts to combat the pandemic: the United States. President Donald Trump’s proposed budget for HIV-related international aid is colored by his “America-first” brand of nationalism, with a requested 17 percent cut in such funds, even as global agencies consistently push for ever-increasing expenditures to get ahead of the pandemic and send it into retreat.

Asked by POZ whether he had anything he wanted to say to the President Trump given his threats of such cuts, Sidibé largely dodged the question and instead focused on what he saw as a consistent level of support from American citizens for the global HIV fight, one that has spanned multiple U.S. presidencies.

About $19.1 billion from all sources was allocated to the HIV response in low- and middle-income countries in 2016. Domestic funding from these nations constituted 57 percent of this figure. UNAIDS projects that by 2020, $26.2 billion will be needed to address the epidemic in these nations, an amount that will decline to $23.9 billion in 2030 as HIV is increasingly brought under control.

The one main global region where the HIV epidemic is not improving is in the former Soviet Union, which has a low proportion of people with the virus on ARVs and has seen steadily rising infections and AIDS-related death rates since 2000.

In 2014, UNAIDS called on nations worldwide to diagnose 90 percent of their individual HIV populations, to get 90 percent of that group on ARVs and to have 90 percent of that group achieve an undetectable viral load by 2020, for an overall viral suppression rate of 73 percent. Such a feat, the agency has forecast, would be instrumental in driving back national epidemics, with the ultimate goal of ending HIV as a major public health threat. (This goal is opaquely referred to as “ending AIDS,” an expression that makes up for in salesmanship and semi-alliteration what it lacks in specificity.)

According to the UNAIDS report estimates, the total number of people treated for HIV in 2010, 2015 and 2016 was a respective 7.5 million, 17.1 million and 19.5 million. In 2016, about 76 percent of pregnant women with HIV had access to ARVs, which prevent mother-to-child transmission of the virus.

An estimated 70 percent of the global HIV population has been diagnosed, 77 percent of those diagnosed are on ARVs and 82 percent of those on ARVs have a fully suppressed viral load, for an overall viral suppression rate of 44 percent, still a far cry from the 73 percent target set for 2020. 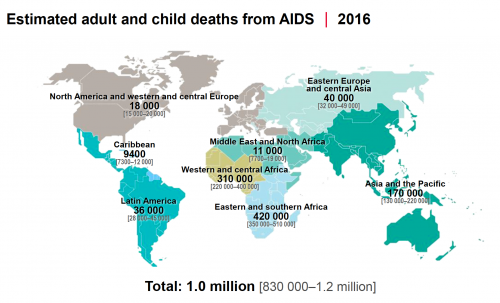 Eastern and southern Africa had an estimated 19.4 million people living with HIV in 2016, or 53 percent of the global HIV population. Fifty-nine percent of the region’s total were women and girls. An estimated 790,000 people in this region contracted the virus in 2016, a figure 29 percent lower than in 2010 and that represents 43 percent of all new HIV infections worldwide last year. The AIDS-related death rate fell by 52 percent during the same interval, to 420,000 in 2016. New infections among children dropped 56 percent during this period, to 77,000 in 2016.

Such improvements in the hardest-hit region in the world are apparently driven by the fact that some 11.6 million people in eastern and southern Africa were on ARVs in 2016, or an impressive 60 percent of those living with HIV in the region. As recently as 2000, scant numbers of individuals in sub-Saharan Africa were on HIV treatment and some doubted that broad-based distribution of ARVs was even feasible there. 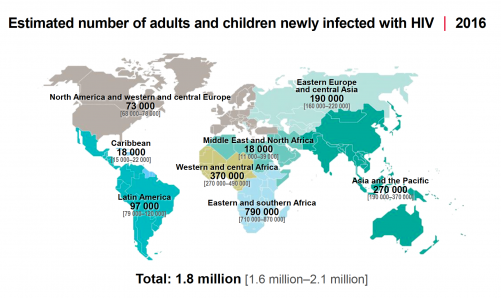 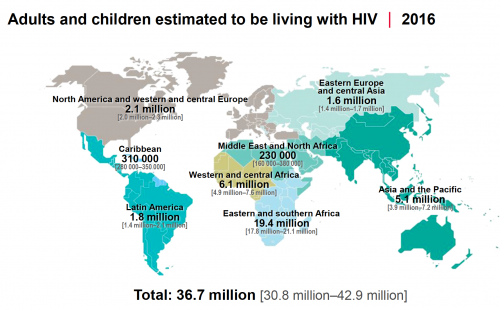 The UNAIDS report lumps together Western and Central Europe and North America, where an estimated 2.1 million people (about half of them in the United States) were living with HIV and 73,000 contracted the virus in 2016. AIDS-related deaths declined by 32 percent between 2010 and 2016, to 18,000. (Recent analysis from the Centers for Disease Control and Prevention (CDC) and other domestic sources point to an HIV epidemic increasingly under control in the United States, with an 18 percent decline in the estimated annual infection rate between 2008 and 2014.)

An estimated 6.1 million people were living with HIV in western and central Africa in 2016, and 2.1 million of them, or 35 percent, were on ARVs. New HIV infections have declined only 9 percent during the decade, to 370,000 in 2016. AIDS-related deaths fell by 21 percent during this period.

As the rate of the HIV population on ARV treatment in Western Europe and North America has marched upward, AIDS-related deaths have fallen steadily since 2000.UNAIDS

In stark contrast with the rest of the world, the collected area of Eastern Europe and Central Asia, including Russia and various former Soviet states, is a region of considerable concern. Between 2010 and 2016, the annual rate of new HIV infections rose 60 percent, to 190,000, and AIDS-related deaths rose 27 percent, to 40,000. Only 28 percent of the HIV population in this region is on treatment for the virus.

“This is a disappointment,” Sidibé said. “We really need to reverse this trend as quickly as possible in Central Asia and Eastern Europe, otherwise we will not win this battle.” 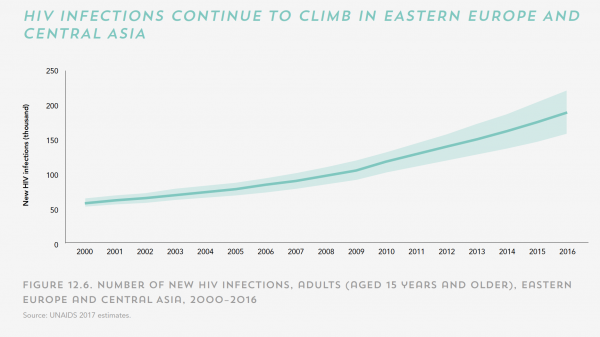 The rate of new transmissions of HIV in Eastern Europe and Central Asia has continued to climb while it has generally fallen elsewhere in the world.UNAIDS

The proportion of the HIV population that is on treatment in Eastern Europe and Central Asia has risen sluggishly while the rate of AIDS-related deaths continues to climb.UNAIDS

The HIV epidemic in Latin America has been relatively stable of late, with about 97,000 people contracting the virus annually throughout the decade. AIDS-related deaths have declined only 12 percent during this period. Some 58 percent of those living with HIV in this region are on ARVs. 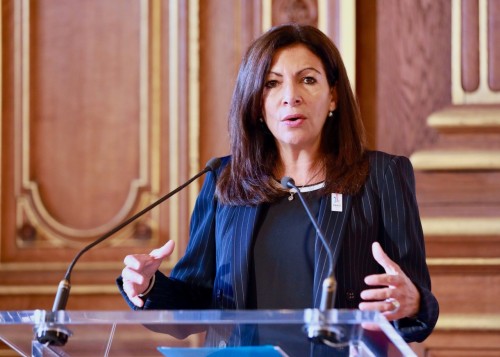 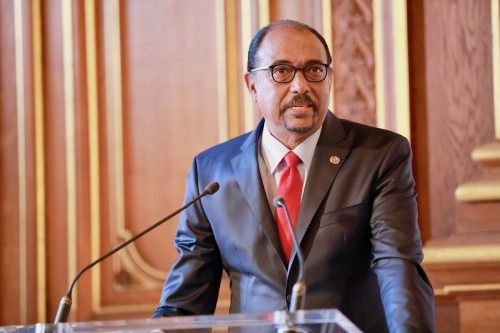