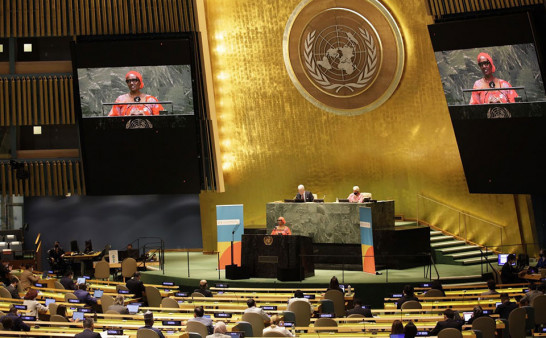 Only four members at the U.N. high-level meeting on AIDS voted against a declaration to reduce HIV rates and stigma.

United Nations member states voted 165 to 4 to adopt a new declaration to end AIDS as a public health threat by 2030. The document sets specific goals, such as lowering annual new HIV cases each year to fewer than 370,000, lowering AIDS-related deaths to under 250,000 by 2025 and providing HIV treatment to 34 million people by the same year.

For comparison, in 2020, about 290,000 people died of AIDS-related illnesses, 1.5 million people contracted HIV and 27.4 million of the 37.6 million people living with HIV were on treatment, according to a recent report by the Joint United Nations Programme on AIDS (UNAIDS).

World leaders must take action to implement the new political declaration so that ALL people have access to life-saving health care.https://t.co/oFALDKAl5x pic.twitter.com/LxOb2Sicoc

The global goals are spelled out in a document titled “Political Declaration on HIV and AIDS: Ending Inequalities and Getting on Track to End AIDS by 2030.” The adoption of the declaration was the culmination of weeks of work and took place during a U.N. General Assembly High-Level Meeting on AIDS, held June 8 to 10 in New York City.

The HIV epidemic continues to take a heavy toll on women & girls.

At #HLM2021AIDS, participants reflected on the realities of women & girls in all their diversity & shared forward-looking recommendations on gender equality.

Other elements of the declaration call on nations to fight HIV stigma and discrimination, to end criminalization of the virus and to ensure that populations at greater risk for HIV—such as adolescent girls and young women, injection drug users, sex workers and men who have sex with men—have better access to prevention, treatment and care. The declaration also asks nations to end gender-based violence and inequalities and to support reproductive health.

“To end AIDS, we need to end the intersecting injustices that drive new HIV infections and prevent people from accessing services,” said Amina J. Mohammed, deputy secretary-general of the United Nations, according to a press release from the United Nations Joint Programme on AIDS (UNAIDS) that includes links to opening remarks and a PDF of the declaration as well as several videos of speakers from the meeting, such as Yana Panfilova (below), a “teenergizer” and GNP+ member who was born with HIV.

If countries across the globe reach the HIV-related targets, then 3.6 million new HIV cases and 1.7 million AIDS-related deaths will be prevented by 2030, according to UNAIDS.org.

“The stark inequalities exposed by the colliding pandemics of HIV and COVID-19 are a wake-up call for the world to prioritize and invest fully in realizing the human right to health for all without discrimination,” UNAIDS executive director Winnie Byanyima said during the meeting, adding that despite the setbacks of COVID-19, “we can end AIDS as a public health threat by 2030 as we promised, if the world comes together.”

The U.N. meeting took place the same week the world marked 40 years of the AIDS epidemic. On June 5, 1981,  a publication of the Centers for Disease Control and Prevention (CDC) first reported on what soon became known as AIDS. To coincide with that anniversary and to help kick off the high-level meeting, UNAIDS released a report assessing the progress the world has made in battling the epidemic. For more, see “40 Years In and 10.2 Million People With HIV Still Aren’t on Treatment.”

For more POZ articles and blogs about this four-decade milestone, see “HIV at 40 Amazing Advances but Challenges Remain,” “Watch HIV Leaders Mark 40 Years of AIDS and Over 700,000 Lost to the Virus,” “Personal Reflections on the 40th Anniversary of HIV/AIDS” and “40 Years of HIV: Where We’ve Been and Where We’re Going.”