The largest-ever HIV prevention study has found that a universal test-and-treat program succeeded in reducing transmission of the virus in hard-hit communities in sub-Saharan African nations. Specifically, the study examined the effects of a program in which outreach workers went door-to-door to conduct HIV testing, provide prevention services and link those who tested positive for the virus to medical care for HIV. This study was largely conducted in the context of national guidelines that recommended universal HIV treatment regardless of CD4 count.

Richard Hayes, DSc, a professor of epidemiology and international health at the London School of Hygiene & Tropical Medicine in London presented findings from the Populations Effects of Antiretroviral Therapy to Reduce HIV Transmission (PopART) study, or HPTN 071, at the 2019 Conference on Retroviruses and Opportunistic Infections (CROI) in Seattle. 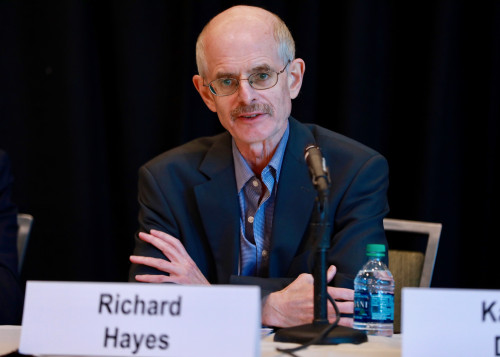 The study, which was sponsored and cofounded by the National Institute of Allergy and Infectious Diseases and largely funded by the U.S. President’s Emergency Plan for AIDS Relief (PEPFAR), ran from 2013 to 2018 in 21 communities in South Africa and Zambia. All told, the study included about 1 million participants, who lived in 21 communities of about 50,000 people each.

The study authors assembled seven groups of three communities in which the members of each trio were matched according to geographical location and the estimated proportion of people living with HIV.

Each trio of communities was then randomized so that each received one of three interventions. Group 1 was contacted annually by outreach workers who went from house to house providing voluntary HIV testing and prevention counseling, including the promotion of voluntary medical male circumcision (which reduces the risk of female-to-male HIV transmission by about 60 percent). Those participants who tested positive were provided linkage to medical care for the virus as well as the option of beginning ARVs immediately. Those who tested negative were provided proven HIV prevention measures.

Group 2 received all that was provided to Group 1, except those who tested positive were offered treatment according to national guidelines. At the outset of the trial, both Zambia and South Africa’s national guidelines stipulated starting ARV treatment when CD4s dropped to 350 or below. The nations raised this threshold to 500 in 2014 and then in 2016 recommended universal treatment for HIV regardless of CD4 count.

Group 3 was the control group and received the local standard for HIV prevention and testing services as well as national-guidelines-driven ARV treatment for those with the virus. This meant that they did not receive visits from the door-to-door outreach workers.

Seeking to determine how the PopART interventions impacted viral suppression and HIV diagnosis rates, the study authors recruited a random sample of 48,300 individuals from the study population between ages 18 and 44 years old. This broke down to about 2,300 individuals in each of the communities studied. These individuals received visits from study investigators upon their entry into PopART and then again annually for three years. At these visits, the participants responded to surveys and received blood testing, including HIV testing.

Between the 12-month and 36-month points in the study, during which the closely monitored cohort was followed for nearly a cumulative 40,000 years, 553 people in this group tested positive for HIV. This translated to an infection rate, or incidence, of 1.4 cases of the virus per cumulative 100 years of follow-up.

Curiously, Group 2 had a 30 percent lower incidence compared with the control group, at 1.1 cases per cumulative 100 years of follow-up. This difference was indeed quite statistically significant and held consistent among all the trios of communities studied.

Of those who tested positive for HIV during the study’s second year, the proportion of each of the three study groups who had a fully suppressed viral load by the third year of the study was 72 percent of those in Group 1, 68 percent in Group 2 and 60 percent in the control group.

The study authors were surprised that the consistent offer of immediate treatment to those in Group 1 was not associated with a significant decline in HIV incidence compared with the control group and that, in fact, those in Group 2, who received treatment according to the (shifting) national guidelines, were the ones who saw a drop in their infection rate. (That said, the timing of the change in guidelines made it such that Group 2 largely received offers of immediate treatment.) This finding was particularly mystifying because it ran counter to the fact that the members of Group 1 who contracted HIV during the study’s first year actually ended up with higher viral suppression rates than those in Group 2.

The investigators hope to conduct more granular analyses of an immense amount of both quantitative and qualitative data from the study in an effort to identify possible explanations for PopART’s surprising outcomes. They hope to report findings about that data at the 10thIAS Conference on HIV Science in Mexico City in July. According to Hayes, the research team has already established that coverage of the intervention was comparable between Groups 1 and 2.

It is possible that migration patterns contributed to the intervention’s lack of impact on HIV incidence in Group 1.

“Clearly, we need to do a lot more analysis to try to explain this dissonant finding,” Hayes said at CROI. “Nevertheless, the overall evidence for this intervention’s effect was strong.”

To read a press release on the study, click here.