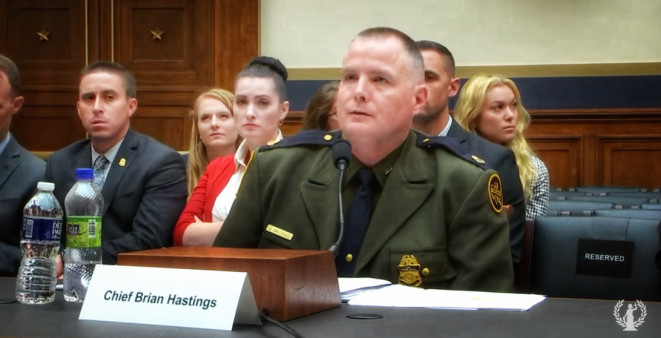 U.S. Border Patrol Separates Children From Parents Who Have HIV

But official immigration policy states that HIV “is no longer defined as a communicable disease of public health significance.”

Editor’s note: This article has been updated to include a group statement by HIV organizations in response to the border separations, plus a joint statement by the HIV Medicine Association and similar health groups.

A U.S. Customs and Border Patrol official says that it is his department’s policy to separate children from their parents if the mother or father has HIV.

Brian Hastings, the chief of law enforcement operations for the U.S. Border Patrol and U.S. Customs and Border Protection (CBP), made the statement July 24 while testifying at a House Judiciary Committee hearing. After receiving reports that U.S. border officials had used HIV as an excuse to separate immigrant families trying to enter the country, Representative Jamie Raskin (D–Md.) questioned Hastings on the topic.

A video of the entire judiciary hearing, titled “Oversight of Family Separation and U.S. Customs and Border Protection Short-Term Custody under the Trump Administration,” was posted on the official website of the U.S. House Committee, as well as to its YouTube channel. You can watch the video in full above; the relevant dialogue starts at about 2:25, and here is a transcript (hat tip to blogger Mark S. King):

Rep. Raskin: If a mother or father has an HIV-positive status, is that alone enough to justify separation from their child?

CBP Chief Hastings: It is because it’s a communicable disease under the guidance.

Raskin: We have reports of kids being separated from their parents on that basis. Is that what we mean by communicable disease? It’s not communicable from contact.

Hastings: I’m not sure if that came from legal counsel. I believe that is defined as a communicable disease.

Raskin: Do you have a list of the communicable diseases?

Hastings: Not with me, sir, no.

Raskin: I mean the flu is communicable. Would we separate parents from their kids if a mom or dad had the flu?

Despite Hastings’s testimony, it is not U.S. policy to consider HIV status a reason to separate families. In fact, the U.S. Citizenship and Immigration Services policy manual regarding communicable diseases of public health significance states:

The officer should disregard a diagnosis of HIV infection when determining whether an applicant is inadmissible on health-related grounds. The officer should administratively close any HIV waiver application filed before January 4, 2010.

On Monday, July 29, a joint statement titled “HIV Status Has No Place in Border Patrol Policy” was issues by the HIV Medicine Association (HIVMA), the Infectious Diseases Society of America (IDSA), the Society for Healthcare Epidemiology of America (SHEA) and the Pediatric Infectious Diseases Society. You can read the full statement on HIVMA.org, but here is a snippet:

“That the decision to separate immigrant parents with HIV from their children is made ‘on a case-by-case” basis, according to a CBP spokesperson, adds to implications that this policy is arbitrary and improvised. As physicians and scientists who specialize in infectious diseases and HIV, we cannot identify any justification for denying parental rights based on HIV status. Similarly, we can find no justification for denying the accommodations that must be made to keep parents with HIV and their children together if medical care is needed, as is recommended in CBP guidance for parents with other medical conditions.

“Moreover, the standard of care for HIV treatment designated by the US Health and Human Services antiretroviral guidelines is that persons living with HIV should receive immediate and continuous antiretroviral therapy to protect both their own health and prevent transmission to others. CBP must adhere to these federal guidelines, and HHS must monitor this adherence. The reported case of a transgender woman with HIV who died in CBP custody in April without access to appropriate HIV treatment is tragic and further incidents like this must not occur. We ask that HHS work with CBP to monitor and document the number of immigrants with HIV and the timeliness of their access to antiretroviral drugs.

“The Trump administration has recognized the potential for following the science and has made a commitment to an “Ending the HIV Epidemic” initiative that aims to reduce new HIV infections by 75% within five years. This goal will not be achieved in an environment that perpetuates misconceptions about HIV transmission and discriminates against people with the virus, threatening their health and that of their families.”

“CBP’s decision to separate children based on their parents’ HIV status is wrong on multiple levels.

“Second, separating people living with HIV from their only support system is disastrous for their health, particularly in stressful and unstable conditions. This separation from their children could drastically impact their health.”

“Finally, we have serious concerns that those in custody living with HIV will receive the medical care they need. Long interruptions in care will endanger their health and their life.

“NMAC calls on CBP to stop family separations based on HIV status and ensure that anyone in their custody living with HIV receives needed care.”

On Friday, July 26, a group of 12 HIV/AIDS organizations issued a joint statement titled “HIV Advocates to Trump Administration: Family Separation Based on HIV, Immigration Status Must End Now.” It’s posted on the Positive Women’s Network–USA website and includes a link for others to sign. The full text is below:

“During a Congressional hearing on Thursday July 25, 2019, Chief Brian Hastings of the U.S. Custom and Border Patrol (CBP) casually explained to Rep. Jamie Raskin (D-MD) that CBP separates families at the border based on HIV status. Indeed, according to reporting from Quartz, three sisters, ages 11, 12, and 14, were permanently separated from their father in November, 2018, after they crossed the border from Honduras seeking asylum, because he was living with HIV (their mother had previously died of AIDS).

“The Trump administration’s endless campaign of terror targeting the most vulnerable people in our country continues. There is no legal, medical, or ethical justification for separating families based on HIV status, let alone ripping families apart and traumatizing children in the process.  In June 2018, a federal judge ordered an end to the administration’s barbaric family separation policy, yet when HIV is involved, the policy continues.

“As a coalition of organizations led by people living with and impacted by HIV, we are crystal clear: separating immigrant families based on HIV status is another flagrant excuse to violate the human rights of people fleeing violence, oppression, and grinding poverty, in order to further this administration’s white supremacist and xenophobic political agenda.

“Because HIV is not transmitted through casual contact, it was removed from the list of communicable diseases barring entry to the United States in 2010. Now, nearly a decade later, the CBP is ignoring not only the policy change, but also the underlying science.

“HIV does not in any way affect the fitness of a parent; indeed, people living with HIV not only have and raise their own children but are also foster and adoptive parents.

“Dehumanizing, abusing, and traumatizing vulnerable people for political gain is the Trump administration’s cruelest currency. U.S. and international law establishes the right to seek asylum. As human rights advocates, we refuse to sit idly by while families are torn apart; children and adults abused, tortured, and denied necessary medical care; and people detained in concentration camps and deported without due process or legal representation.

“We demand an immediate end to family separations; we demand that the concentration camps close immediately; and we demand that human rights for all, regardless of immigration or HIV status, be protected and defended, not abused and denied, by all representatives of the U.S. government.

“We call on all 2020 presidential candidates to immediately and explicitly commit to these demands.”

As Newsweek reports on the situation, the World Health Organization (WHO) has worked to dispel the idea that refugees carry diseases. A recent WHO report noted that “there are indications that there is a very low risk of transmitting communicable diseases from the refugee and migrant population to the host population.” And a WHO official, speaking about immigrant populations, said, “The diseases that they might have there are all well-established diseases. Also, we have very good prevention and control programs for these diseases. This applies both for tuberculosis, but also HIV/AIDS.”