Increases in syphilis have been driven by new cases in men who have sex with men, an estimated half of whom have HIV.

The Centers for Disease Control and Prevention (CDC) reports that new diagnoses of sexually transmitted infections (STIs) have continued their steady upward trajectory in the United States, with combined cases of chlamydia, gonorrhea and syphilis hitting a record high of 2.5 million cases in 2018.

Increases in syphilis, the one STI for which the CDC keeps records regarding the sex of diagnosed individuals’ sexual partners, have been driven by new cases among men who have sex with men (MSM), in particular among those living with HIV. 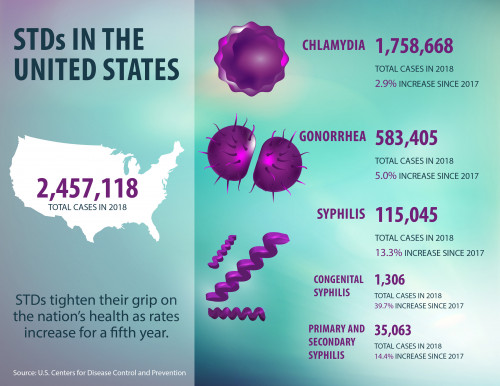 Antibiotics can cure chlamydia, gonorrhea and syphilis. Left untreated, these STIs can lead to health problems. Undiagnosed and untreated STIs lead to infertility in more than 20,000 women annually.

Since 2018, the gonorrhea diagnosis rate has remained higher among men than women. Men saw a 6.0% increase in the diagnosis rate between 2017 and 2018 and a 78.7% jump between 2014 and 2018. Data suggest that MSM are disproportionately affected by the STI. The corresponding respective rate increases among women were 3.6% and 45.2%. As with chlamydia, increased diagnoses may be driven both by increased testing and increased acquisition of gonorrhea.

During recent years, the CDC and other world health agencies have issued increasingly urgent warnings about the potential emergence of strains of gonorrhea resistant to currently recommended antibiotics. In 2018, a British man contracted a highly drug-resistant strain but was ultimately successfully treated for the STI with three days of an intravenous antibiotic.

At least for now, however, the recommended first-line treatment of azithromycin and ceftriaxone should be effective against almost all strains of gonorrhea circulating in the United States. That said, according to the new CDC report, more than half of the diagnosed gonorrhea strains were estimated to be resistant to at least one antibiotic in 2018. Reassuringly, since 2009, almost all circulating strains of the STI in the United States remain susceptible to ceftriaxone, with just 0.2% showing signs of resistance.

Between 2017 and 2018, the number of new cases of congenital syphilis—diagnoses among newborns who contracted the STI from their mothers—increased by 39.7% to 1,300 cases. This translated to a diagnosis rate of 33 cases per 100,000 live births. Newborn deaths from syphilis increased by 22.1% between the two years, from 77 to 94 deaths. During the same period, syphilis diagnoses increased by 36% among women of childbearing age.

“STDs can come at a high cost for babies and other vulnerable populations,” said Jonathan Mermin, MD, MPH, director of the CDC’s National Center for HIV/AIDS, Viral Hepatitis, STD, and TB Prevention, in a press release. “Curbing STDs will improve the overall health of the nation and prevent infertility, HIV and infant deaths.”

The CDC indicates that various factors are likely driving increases in STIs. These include drug use, poverty, stigma and unstable housing, which can compormise people’s access to STI prevention and care services. Additionally, condom use is falling among at-risk individuals, including young people and MSM.

The United States has also suffered severe cuts to STI programs at both the state and local level, with more than half of local programs experiencing budget cuts in recent years. This has led clinics to close, reduce testing, shrink staffs, reduce follow-up with patients after testing and curtail efforts to help with linking them to services.

“We have an STD crisis in the U.S. because prevention programs were sold short for years,” David C. Harvey, executive director of the National Coalition of STD Directors, said in a press release. “Our first line of defense is underfunded and overwhelmed, leaving Americans vulnerable to STD outbreaks, and that’s exactly what we’re seeing.” 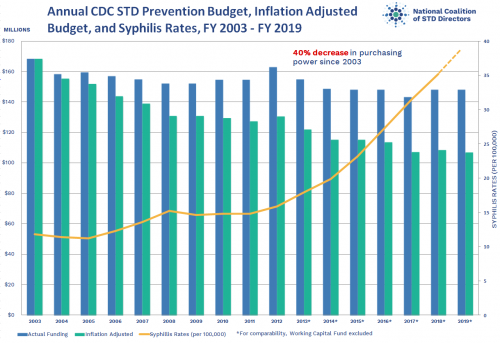 To read a CDC press release about the report, click here.

To read a CDC fact sheet about the report, click here.